The fare war on flights to Europe has hit large and small cities across the U.S. and likewise to both large and small cities in Europe. If you think it's necessary to fly from or to a major city for a cheap flight, think again. The big 3 legacy carriers American, Delta, and United are all attacking each other's hub cities on both sides of the pond with incredible deals. Fares between several cities are in the $400s roundtrip.

Many cities that rarely see prices this low to Europe are included such as Columbus (CMH), Duluth (DLH), and Fresno (FAT). And if you live near a Delta or United hub like Atlanta (ATL), Houston (IAH), or San Francisco (SFO), you'll find great deals to smaller cities all across Europe. The possibilities are endless.

Some flights may be operated by partner airlines such as Air Canada, Air France, British Airways, KLM, or Lufthansa.

Prices shown are what was found from Columbus (CMH) and represents an approximate price to these cities from nearly everywhere in the U.S.

Nearly every U.S. airport to:

This is just a sample of deals available. There are several other cities included in this widespread sale. Even if your city isn't listed, make sure to check the price from your local airport for a super deal.

Upgrading to Main Cabin Economy will cost an additional $120 - $160 roundtrip on most routes. Certain travel dates and/or routes may be more or less to upgrade. This type of fare will include one free checked bag, seat selection, and the ticket will be eligible for upgrades/changes in the itinerary (fee applies).

As an example, I found a flight on United departing Springfield SGF on Tuesday, November 19 returning from Nice NCE on Wednesday, November 27, for $491 roundtrip. 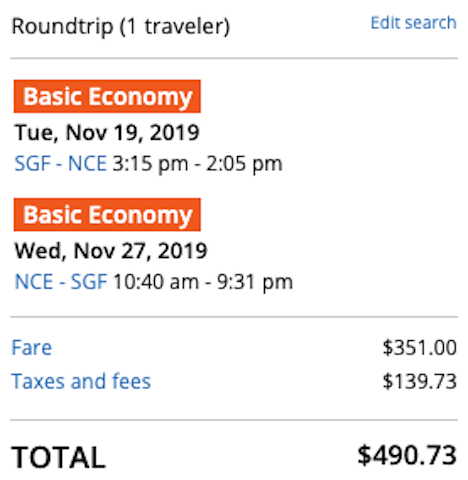