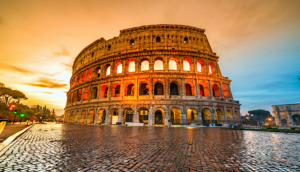 We're seeing some big price drops on flights to Rome from a few major markets in the U.S. today.  Fares are as low as $242 roundtrip.

Similar to the flight deals to Paris we mentioned yesterday, these fares are on legacy carriers. And while American Airlines had the bulk of low fares yesterday, it appears Air Canada/United have responded by lowering its fares today.

Some flights may be operated by partner airlines such as Lufthansa, Swiss, British Airways, Finnair, or Iberia.

Update September 13, 2019: Fares on American Airlines have gone up, but Delta and Alitalia have joined this fare war from the New York area with nonstop flights and United dropped its price on nonstop flights from Newark.

For more deals to Italy, check out all of our fares to Rome (FCO), Milan (MXP), and Venice (VCE).

Seats will be assigned at random upon check-in for Basic Economy. You may be able to pay a fee to choose a specific seat. Standard Economy fares may include advanced seat assignments on certain airlines like American and United. Air Canada charges a seat selection fee for both Basic and Standard Economy.

Upgrading to a standard or Main Cabin Economy will cost an additional $120 - $160 roundtrip on most routes. Certain travel dates and/or routes may be more or less to upgrade. This type of fare will include one free checked bag, seat selection on certain airlines, and the ticket will be eligible for upgrades/changes in the itinerary (fee applies).

As an example, I found a flight departing Los Angeles LAX on Monday, November 11, returning from Rome on Wednesday, November 20, for $245 roundtrip.