Set your sights across the Atlantic this autumn or winter with Norwegian Air's Explore more of Europe Sale. One-way flights start as low as $115, and roundtrip itineraries can be purchased for as little as $250+!

Cities in Spain, France, England, Scandinavia, and other destinations throughout Europe are seeing phenomenal price drops. So take a look below and see what's departing from your neck of the woods.

Sale fares are available for fall travel and on most routes from October through March, seasonal routes are available through October. Since each city-to-city pair has a different travel window and departure schedule, click on the fare details links below to see which dates are available from your nearest airport.

Seen below, searching Norwegian's site, I found a flight departing Ft. Lauderdale FLL on Thursday, October 17, with a return leg from Paris CDG on Sunday, October 27, 2019, for $329 roundtrip. 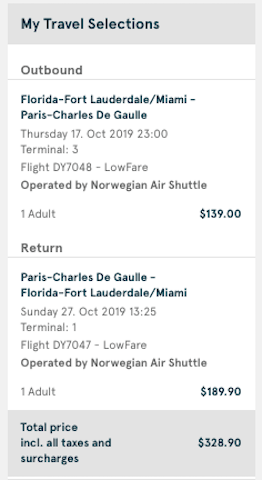