It doesn't get any cheaper than this. Frontier Airlines is selling tickets for just a penny (plus taxes) on a total of 88 routes (counting both directions). After taxes and mandatory fees, fares are just $10-$15 one-way or $25-$29 roundtrip. There are also many other routes on sale for under $100 roundtrip.

Frontier even eliminated its online booking fee for these super-low fares so this is the absolute lowest price you can get on these flights. Bag fees are extra unless you can travel with just a small backpack.

The penny fare sale is advertised for travel on scattered dates in late August and early September.

Some routes will only have very limited availability at these rock-bottom fares and most routes are only flown on specific days of the week. Click on the fare details below for booking info.

Searching Frontier's site, I found a flight departing Los Angeles LAX on Frontier's inaugural flight to Las Vegas, Tuesday, September 10, returning from Las Vegas LAS on Thursday, September 12, for $29 roundtrip. There isn't an online booking fee (carrier interface charge) for this fare, and therefore, it won't be any cheaper at the airport. 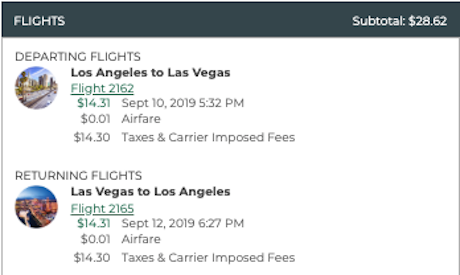