Costa Rica on Sale from $225+ Roundtrip

Sloths, beaches, rain forests, what's not to love about Costa Rica? We're seeing some great fares to Costa Rica from several U.S. and Canadian cities. Fly to the tropics on airlines like American, Alaska, Copa, Delta, JetBlue, Southwest, and United, from just $225 roundtrip.

Rules and restrictions vary by route. Travel dates range between August and June. Most routes only have low fares available for travel through February or early March and a few are for fall travel only.

Peak holiday travel around Christmas and New Year's will have higher fares, but there may be some routes with travel dates over Thanksgiving.

This sale is unadvertised and fares may jump at any moment. Secure your low fare by booking now and taking advantage of the 24-hour risk-free cancellation to think about your plans.

There may be more similar fares out there. For more deals to Costa Rica, have a look at all of our fares to San Jose (SJO) and Liberia (LIR).

JetBlue and Copa include advanced seat selection and Alaska may have a limited choice of seats.  Southwest has an open seating policy where you choose your seat as you board the plane. General boarding priority is determined by time of check-in. On other carriers, seats will be assigned at random upon check-in for these prices. You may pay a fee to choose a seat or choose to upgrade to the standard Economy fare.

On a few spot checks, it seems to be $50-$60 more roundtrip for an upgrade to a standard Economy fare on American, Alaska, Delta, and United. This type of fare will include a full-size carry-on bag on United. It will also include advanced seat selection and allow for ticket changes (fee applies)/upgrades on all carriers. A checked bag is the same $30 fee each way.

Spirit Airlines is selling cheaper tickets from many cities, but Spirit's Bare Fares only include a small personal item and you may prefer paying a little more to fly on a classic carrier.

As an example, I found a flight on Delta, departing Buffalo BUF on Friday, October 25, returning from San Jose SJO on Sunday, November 3, for $335 roundtrip. 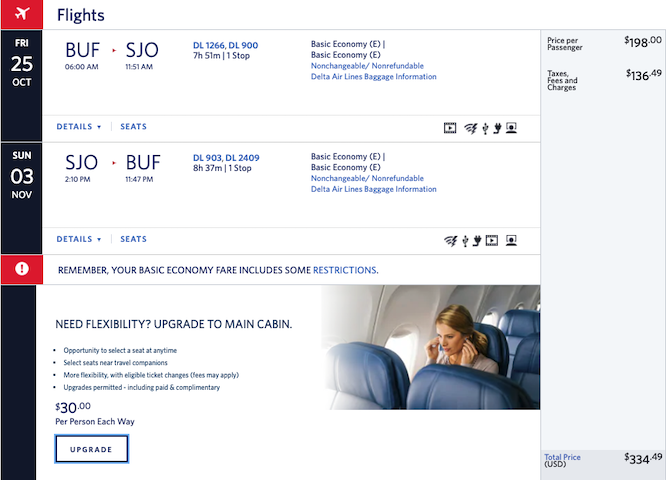