Price Drop! Nonstop Flights to Europe from $225+ Roundtrip on Delta

Delta has dropped prices (again!) on several of its nonstop flights to Europe. It's rare to see these prices in the $400s roundtrip from hub cities like Atlanta (ATL), Detroit (DTW), Minneapolis (MSP), and Salt Lake City (SLC). And we're also seeing some unusually low fares on nonstop flights from Boston (BOS) for under $300 roundtrip. Cheap nonstop fares to Europe are available from many cities, including Los Angeles (LAX), New York (JFK), and more, with fares as low as $225 roundtrip.

Some of these nonstop flights may be operated by partner airlines Air France, Alitalia, KLM, or Virgin Atlantic. American Airlines, British Airways, and other carriers may be matching prices along some routes and lower fares may be available with a connection.

Travel dates vary depending on the route. Most are available for travel between late October and early April. Cheap flights to London are available from September through mid-June, and other routes may only be available in limited months.

Peak holiday travel times in late December and early January are blacked out, though you may find availability over New Year's if you stay through the first week of January.

This sale is unadvertised and fares may jump at any moment. Try many different sites if you are finding prices jumping as inventory can go quickly and may still be available on another booking engine.

Upgrading to Main Cabin Economy will cost an additional $90-$140 roundtrip on most routes. Certain travel dates and/or routes may be much more to upgrade. This type of fare will include one free checked bag, seat selection, and is eligible for ticket changes (fee applies)/upgrades. 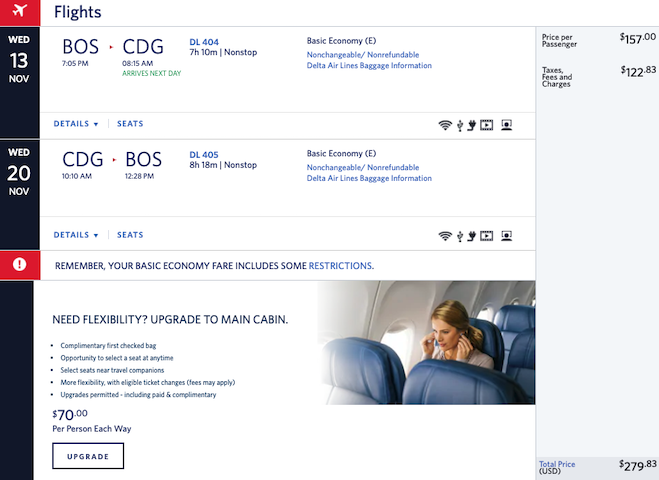