Here's another flash sale to Hawaii on United. Fly from Delta's major hub cities to Honolulu for just $417 roundtrip.

Travel from August 19 through December 18, 2019, on Mondays, Tuesdays, Wednesdays, and Thursdays.

United's Basic Economy fares only include a small personal item and do not allow a full-size carry-on bag. A checked bag is $30 each way on all fares.

Seats will be assigned at random upon check-in or you may be able to pay a fee to choose a specific seat.

Basic Economy fares can be upgraded to a standard Economy for an extra $90 roundtrip. which includes a full-size carry-on bag, standard advanced seat selection, and allows ticket changes/upgrades for a fee. The first checked bag fee is the same $30 each way. 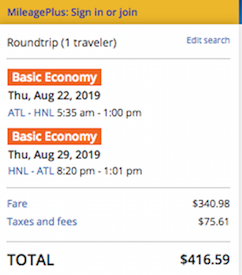