Nationwide Sale from (almost) Every U.S. Airport to Europe from $285+ Roundtrip

The flight deals to Europe have hit nearly every single airport in the U.S. American Airlines along with partners British Airways, Iberia, and Finnair are selling tickets to Berlin (TXL), Munich (MUC), Vienna (VIE), and Zurich (ZRH) in the $300s roundtrip from both small and large airports across the nation. A few cities even dip below $300—as low $285 roundtrip.

It's rare to see a deal like this so widespread so take advantage of it while you can. We mentioned many larger U.S. cities to Munich earlier and these fares have dropped an extra $10 from this morning, which is usually an indication that they are about to go way back up in price.

Many routes only require a 28-day advance purchase and might also have availability in late August, September, and early October. Dates may be scarce in this period, not available, or fares may only be slightly higher.

Peak winter holiday travel dates are blacked out, and a Saturday night or 7-night minimum stay is required.

This sale is unadvertised, and fares may jump at any moment. Book now to avoid missing out. And sign up for fare alerts to find out about the next big deal.

This is just a sample of fares, there are much more included in this nationwide sale. Even if your city isn't listed, make sure to check the price from your local airport for a super deal. The most notable omissions from this sale are certain American hub cities like Charlotte, Dallas, and Phoenix, randomly Pittsburgh, and any airport where American Airlines doesn't fly.

Upgrading to Main Cabin Economy will cost an additional $160 roundtrip, and will include one free checked bag, seat selection, and the ticket will be eligible for upgrades/ticket changes (fee applies). 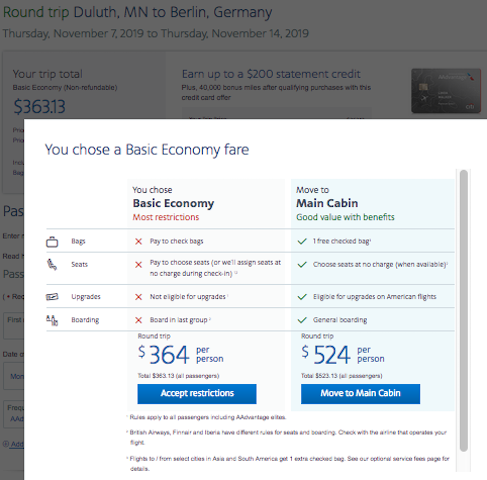