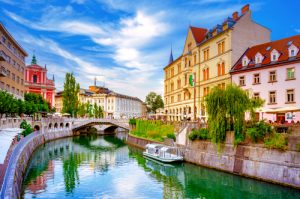 Flights to Eastern Europe in the $400s Roundtrip

It's an all-out fare war on flights to Europe among the "Big 3" airline alliances associated with American, Delta, and United. Along with great fares to Western European cities, we're seeing amazing prices for flights to Eastern Europe in the $400s roundtrip from several U.S. cities.

Best of all, some of these flight deals are booking into regular Economy, which means one free checked bag is included and you'll be able to choose your seat assignments. Read the details when booking because most of the deals book into Basic Economy.

Some flights may be operated by airline partners such as Air Canada, Air France, British Airways, Iberia, KLM, Lufthansa, or Swiss. Who knows how long these deals will stick around. I'd suggest booking right away if you see something you like.

Travel from late October through early April. The lowest fares are available for travel to Europe Sundays through Wednesdays, returning from Europe Tuesdays through Fridays. It may be only slightly more expensive to travel on the weekends.

Peak holiday travel times in late December and early January are blacked out, though you may find availability over New Year's if you stay through the first week of January.

This sale is unadvertised and fares may jump at any moment. Try many different sites if you are finding prices jumping as inventory may still be available on another booking engine.

Main Cabin Economy fares include advanced seat assignments. Seats will be assigned at random upon check-in for Basic Economy. You may be able to pay a fee to choose a specific seat.

Upgrading from a Basic Economy fare to a standard Main Cabin Economy fare will cost an additional $120-$180 on most routes. Certain travel dates and/or routes may be much more to upgrade. This type of fare will include one free checked bag, seat selection, and are eligible for upgrades/ticket changes (fee applies).

Some of the prices listed require two stops and it may only be slightly more expensive to fly on a different carrier or routing with only one stop.

As an example, I found seats in standard Economy departing Atlanta ATL on Wednesday, November 13, with a return flight from Ljubljana LJU on Thursday, November 21, for $482 roundtrip. That includes one free checked bag!