Royal Jordanian Global Summer Sale: Flights to the Middle East and Beyond Starting at $573 Roundtrip

Royal Jordanian wants you to just "Less Go!" with its Global Summer Sale, and the airline is offering some pretty outstanding fare deals to airports throughout the Middle East and Europe. Fares to Jordan start at just $573 roundtrip, and onward destinations like Dubai and Abu Dhabi are available for only $593+. That's $200 less than the going rates on most of these routes!

Especially to destinations that rarely see price cuts, like Larnaca, Aqaba, and Cairo where you can tick off bucket list trips to a modern world wonder – Petra, or one of the ancient world – the Great Pyramid at Giza.

Flights are valid from September 10 through March 10, 2020. Travel days will vary by route, but I had the most luck with Tuesday and Thursday departures. Flights departing Detroit are a little harder to find than the rest, but they are out there on specific dates. The Royal Jordanian site does hiccup here and there, but you should be able to find them with the flexible date search.

There is a maximum stay of 45 days and a blackout period during Christmas and New Year. 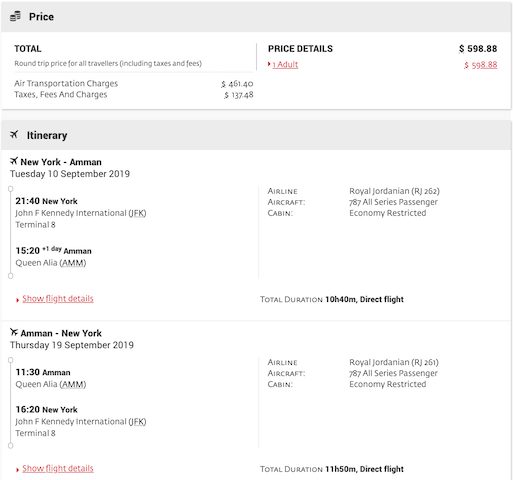