Outstanding flight deals to Europe keep rolling in, and Amsterdam (AMS) is the latest destination seeing some significant price drops. Depending on your U.S. departure city, airline availability will differ, but major carriers like TAP Air Portugal, American, British Airways, and United are all offering fares to the Dutch capital at prices between $360 - 440 roundtrip.

Best yet, these fares are pretty wide-open and available for travel through spring of next year, on some routes, you'll even luck out and find some seats lingering around during peak season August and early September dates.

Don't rely on Dutch courage to wait and book, who knows how long these deals will stick around. There seem to be new deals every day, but chances are these will be gone quicker than Tulipmania.

These discounted fares are available for travel from October through April 2020. A Saturday night or a 7-night minimum stay is required. On some city pairings, you may be able to find availability in August and September.

This sale is unadvertised, and fares may jump at any moment. Try many different sites if you are finding prices jumping as inventory is going quickly and may still be available on another booking engine. Many of the fares below were available on Priceline and Expedia at the time of this posting.

Seats will be assigned at random upon check-in for Basic Economy. You may be able to pay a fee to choose a specific seat.

Upgrading to Main Cabin Economy will cost an additional $84-$180 on most routes. Certain travel dates and/or routes may be much more to upgrade. This type of fare will include one free checked bag, seat selection, and are eligible for ticket changes (fee applies)/upgrades.

Flights operated by TAP Air Portugal offer one-way fares that can be purchased at an outstanding value compared to what other airlines charge on these routes. Plus they provide the chance for a free stopover in Portugal along the way!

As an example, using Priceline, I found a flight departing Seattle SEA on Monday, November 4, with a return flight from Amsterdam AMS on Thursday, November 14, for $370 roundtrip. 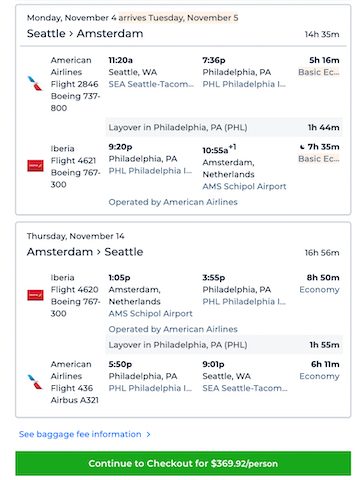