We're seeing some big price drops on cross-country flights today. Fly on "full-service" airlines like American, Delta, and United, from coast-to-coast for as little as $164 roundtrip.

These excellent fares aren't limited to major airports. We're seeing some especially great deals flying between secondary cities on both coasts. Flying from Sacramento to West Palm Beach may be quicker and cheaper overall than a flight from San Fran to Miami depending on exactly where you'd like to end up and/or your home location.

Other airlines like JetBlue, Southwest, or Alaska Airlines may be competing with the Big 3 on some routes so make sure to compare to find the best deal.

Travel days vary by route. Pretty much all routes are available for travel on Tuesdays and Wednesdays from August 20 - October 9, 2019.

Some routes are also available for travel on other days of the week starting as early as July, with availability through the end of the booking calendar in May 2020. Click on the fare details below for more info.

Peak holiday travel around Thanksgiving, Christmas, and New Year's will have higher prices.

This sale is unadvertised and fares my jump at any time.

JetBlue includes standard advanced seat assignments. Southwest has an open seating policy where you choose your seat as you board the aircraft. On American, Delta, United, seats will be assigned at random upon check-in for these Basic Economy prices.

Fares on American, Delta, and United can be upgraded to a standard Main Cabin Economy fare for an extra $70 roundtrip on most routes and dates. This type of fare includes a full-size carry-on bag, advanced seat selection, and allows ticket changes/upgrades for a fee. First checked bag fee is the same $30 each way.

Some routes may have similar or slightly lower fares on Frontier or Spirit, but you'll likely have a better experience flying on one of the major airlines.

There are some really great deals on several routes across the U.S.—especially to/from small markets for travel between August 20 and October 9. Check out all of our current finds from your city. 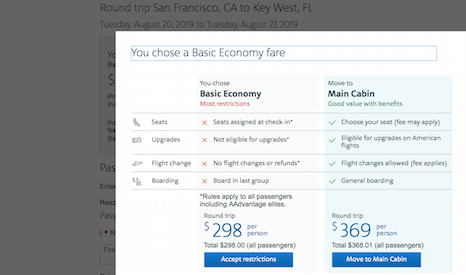