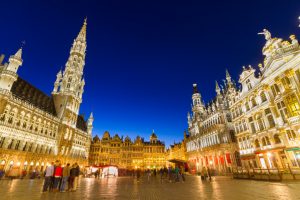 We're seeing even more amazing deals to Europe today! American Airlines, along with Oneworld partners British Airways and Iberia, are lowering fares from select cities in the U.S. to locations all over Europe. Fares are as low as $284 roundtrip.

In addition to sales mentioned earlier to Germany and from Washington D.C. to Dublin and Barcelona, we're seeing even more deals to cities like Brussels (BRU), Geneva (GVA), Lisbon (LIS), Vienna (VIE), and Zurich (ZRH). More cities may be reduced in price as well.

These discounted fares are available for travel from late October through early April. A Saturday night stay is required.

These are Basic Economy fares, which only include a carry-on bag plus one personal item. The first checked piece of luggage will cost $60 each-way.

Upgrading to Main Cabin Economy will cost an additional $160 on most routes. This type of fare will include one free checked bag, seat selection, and are eligible for upgrades.

As an example, I found a flight departing Chicago ORD on Friday, January 10, with a return flight from Zurich ZRH on Sunday, January 19, for $284 roundtrip.