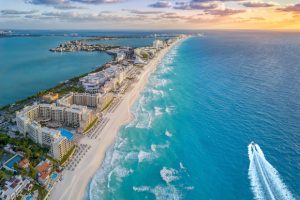 Unadvertised Sale to Cancun: Fares Starting at $204 Roundtrip on United, American, and JetBlue

We've got a perfect combo of a hub attack and cheap international fares going on today that's driving down prices from many U.S. airports to Cancun. It looks as if United is targeting traditional American Airlines hubs with price cuts from cities like Philly, Phoenix, and Charlotte to the Mexican hotspot.

Not to be outdone, American and JetBlue are offering up some great deal on their own network of nonstop options South of the Border for some phenomenal fare deals to the Yucatan.

Travel on most of these routes is available as early as today with departures valid through the end of May, returns in June possible. Then again from early September through mid-November. Departure days will vary by route, but in most instances, the bulk of seat inventory can be found for midweek departures. No minimum stay required.

These won't last! Book now! You'll have 24 hours to think about your plans with a risk-free cancellation policy.

If your city isn't listed above, that doesn't mean it isn't marked down. Have a look at all of today's finds to Cancun (CUN) to see what's available from your local airport.

These fares include standard carry-on baggage on routes. Only fares departing IAH are in United's Basic Economy bucket and allow for a small personal item only.

On United, standard seat selection is included with many of these fares, although selection may be limited on JetBlue flights. Seat selection on American operated flights not available at these prices.

These are generally the lowest offered prices on these routes.

As an example, I found a flight departing Philadelphia PHL on Tuesday, May 14, returning from Cancun CUN on Wednesday, May 22, 2019, for $249 roundtrip.