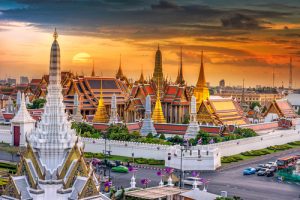 Fly to Southeast Asia in style this fall or winter on a 5-star airline ANA. Fares to destinations in Malaysia, Thailand, Indonesia, and Vietnam are available starting at just $510 roundtrip. Best of all, you can add a stopover in Tokyo for around $100 more to turn these fares an amazing 2-for-1 value.

Most legs are on ANA aircraft, but in some instances, StarAlliance partner United Airlines may operate some segments of the journey.

Travel rules vary slightly depending on the route, but all fares are for travel on Mondays, Tuesdays, Wednesdays, and Thursdays. In general, departures from North America are available starting in late August through November, then again from mid-January to the end of booking schedule in March 2020. Not all fares available for winter travel or may cost a few dollars more.

Searching United's website is the best option for finding these fares as many third-party sellers, and ANA's site are displaying higher prices on some routes.

There may be great deals from or to other cities as well. If your city isn't listed, have a look at all of our fares to Bangkok (BKK), Kuala Lumpur (KUL), Jakarta (CGK), and Ho Chi Minh (SGN).

These fares include two free checked bags in addition to a carry-on bag plus a personal item.

If you'd also like to see Japan on your way to or from Southeast Asia, you may be able to add a stopover in Tokyo for around $100 more. This can be an excellent value for a 2-for-1 trip as flights to Tokyo are generally more expensive on their own.

Also, with an abundant amount of low-cost carriers flying in Southeast Asia, you can usually fly within the region for around $20-$50 per flight. Booking one of these ANA flights as an "open-jaw" flight from North America into one city and back from another will satisfy the roundtrip requirement for these fares, and you'll likely find similar prices. Simply book a separate cheap flight on another carrier to get between the two cities.