Volaris Flash Sale to Mexico and Central America from $122+ Roundtrip

Volaris is having another "flights on the fly" flash sale with $39 one-way and $122+ roundtrip flights from US airports to Mexico or Central America.

Travel is available on select dates in September and October.

Many routes are only operated on limited days each week and have scarce availability. You may have to adjust your travel dates to find flights. Click on the fare details below for specifics.

This is not a complete list. Nearly all routes on Volaris have $39 or $55 one-way flights to Central America. One-way flights to Mexico are as low as $68 for non-residents or $39 if you are a Mexican passport holder. Return flights are priced slightly higher to get these roundtrip prices (including non-resident fee). You must be flexible with travel dates to get these prices.

As an example, searching on Volaris.com, I found a nonstop flight departing Chicago ORD on Saturday, September 14, returning from Mexico City MEX on Tuesday, September 17, for $170 roundtrip. 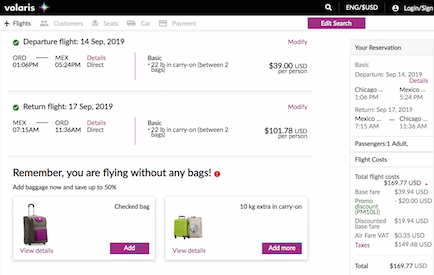