We've got an old fashioned fare war on our hands from United Airlines today! The airline is cutting fares from Delta hub airports on routes to four Hawaiian airports down to $355 roundtrip.

Flights from Detroit, Minneapolis, and Salt Lake City are available at these reduced rates for year-round travel, and seat inventory is wide-open in most months. Book that island getaway you've been dreaming about on the cheap!

On many of these routes, departures are available as soon as today or as early as next week. Travel is valid any day of the week in most instances even in peak summer months. The only blackout period is during the winter holiday period. Thanksgiving travel is available on select city pairings.

Overall this is one of the better Hawaii sales we've seen lately due to its wide-open availability and travel window. Some fares may require two connections. Las Vegas and Phoenix fares only available Monday through Thursday through October 31, 2019.

This sale is unadvertised, and fares may jump at any moment. These are all big price drops, which generally don't last very long after falling this low. Secure your low fare by booking now and taking advantage of the 24-hour risk-free cancellation to think about your plans.

In cases of these fare wars attacking competitors hubs, more cities may be added by American and Delta if they retaliate with fare deals.

So, if your city isn't listed, have a look at all of our fares to Honolulu (HNL), Maui (OGG), Kauai (LIH), and Kona (KOA) for an updated list of today's best fares to Hawaii. All routes work in the reverse direction as well.

This Basic Economy fare only includes one small personal item. A full-size carry-on bag is not allowed. Checked bag fees start at $30 each way.

Seats will be assigned at random upon check-in for this price. You may pay a fee (for each flight leg) to choose specific seats.

For an additional $90 roundtrip, you can purchase a regular Economy fare, which includes a full-size carry-on bag, standard advanced seat selection, and allows ticket changes/upgrades for a fee. First checked bag fee is the same $30 each way. 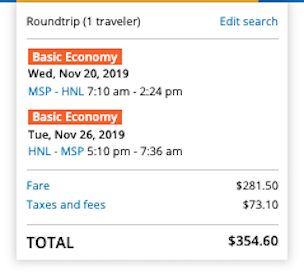