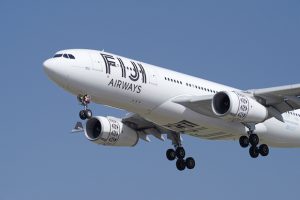 Dreaming of that perfect island escape? Fiji Airways is here to help with its latest Spring Sale on nonstop flights to Fiji and onward connections to Australia and New Zealand.

Flights to Fiji are the lowest out of the bunch starting at $626 roundtrip, but some of the best deals can be had if you mix in a free stopover when traveling to Australia or New Zealand! Spend some time in an overwater bungalow in Fiji before flying off to Christchurch, NZ for a ski trip. All for $747 roundtrip! You won't find a better flight deal that.

Lower fares may be available on other airlines from these cities to Australia and New Zealand, but if you want to take a 2-for-1 trip, take advantage of Fiji Airways' free stopover program for connections less than 72 hours. If stopover is more than 72 hours, additional taxes will apply.

Flights from Los Angeles are operated daily. Flights from San Francisco are flown on Tuesdays, Thursdays, and Saturdays. Hawaii flights are only flown on Sundays. However, there may be other scattered days of the week available with stopover itineraries.

The travel window is from March 1 through December 11, 2019. Blackout dates vary depending on the route (mostly peak summer dates). Click on the fare details below for more booking info.

All tickets must be purchased by February 27, 2019, to receive the listed sale prices.

These are the advertised fares. Prices may actually be slightly lower depending on which booking site you use try Expedia, Orbitz, or Priceline to receive these rates.

For more deals to Oceania, have a look at all of our fares to Nadi (NAN), Sydney (SYD), Auckland (AKL), Brisbane (BNE), Adelaide (ADL), Melbourne (MEL), Christchurch (CHC), and Wellington (WLG).

Need a place to stay in Fiji? Whether it's your only stop or just a few nights on a stopover, have a look at these hotel options on TripAdvisor.