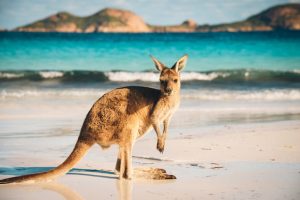 As I predicted in my destinations that should see lower flight fares in 2019, tickets to Australia seem to keep on creeping down in prices. The latest sale from Qantas is proving my point with some of the lowest advertised rates we've seen to Oz in ages. In some cases, even cities like Denver, Chicago, and Washington DC that aren't listed in this sale are reaping the benefits of the cheap connections.

The official sale features all Qantas operated flights from the United States and Canada to Australia's big three - Sydney, Melbourne, and Brisbane starting at just $633 roundtrip. I have also listed other great unadvertised fares that are seeing price drops which have been noted and may not last for long. They might disappear at any moment so I'd recommend booking those ASAP before they bounce away like a pod of kangaroos.

Each route has varying departure dates, but most are available starting in early February through late June, July through September, then again in November through mid-December. Departures are available Monday through Thursday, and a 5-day minimum stay or Sunday night is required (not that you'd fly all that way for less than a week). If Australia is one of your bucket-list destinations and you are looking to up your travel game in 2019 – then now's a perfect time to book that dream trip, mate!

Prices are available through midnight on January 22, 2019, PST.

If you don't see your local airport listed above, don't fret. This sale seems to be quite widespread and many other cities are included. Check out our Melbourne (MEL), Sydney (SYD), and Brisbane (BNE) fare pages to see what's available closest to you.