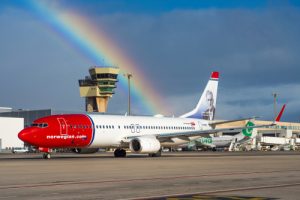 Norwegian Air is having a New Year's sale and has a put all routes on sale for travel this winter and spring. One-way fares to the Caribbean start at $59 and you can fly to Europe for just $99 one-way. Roundtrip fares start at just $158 to the Caribbean and only $232 roundtrip to Europe.

You may be able to obtain slightly lower fares by purchasing two separate one-way fares and booking the return flight on a Norwegian website from a different country of origin. Keep in mind foreign transaction fees may apply if booking in a different currency. Use a credit card with no foreign transaction fees to avoid any potential loss in savings.

For this sale, travel is valid for departures from the USA between January 14 and March 31, 2019. Return travel may be available through May or mid-June depending on the route. There may be blackout periods during peak break periods in late February/early March.

Some routes are seasonal and a few are only flown on certain days each week. Make sure to click on the fare details for more information on each route.

Norwegian's LowFare only includes a maximum combined weight of 22 lbs. between your carry-on bag and personal item. Checked baggage for Caribbean flights starts at $18 each way and $45 each way for European flights.

Here are some tips on How to Fly Norwegian Air.