The Thanksgiving Foods You Can and Cannot Fly with This Year

As if the logistics of leaving town for a long holiday weekend weren’t enough, the situation only becomes more complicated when attempting to transport a glob of molten yams across the country. Is the lid on tight enough? Is it weird to put a casserole in the overhead?

And what will the TSA say about your sweet potato casserole? It’s not technically a liquid, but a toasted marshmallow topping does not a solid make. So is it a gel?

Earlier this year, the TSA announced crack downs on food items and powders, warning travelers that these items would be subject to additional scrutiny. After all that yam mashing, it would be a shame to see your hard work tossed in the trash, or, most likely, in the stomach of a TSA agent.

If you’re unsure exactly which food items are carry on approved, luggage storage service LuggageHero has put together a handy guide of TSA banned foods along with what is actually allowed.

As a general rule, anything solid and hard makes the cut. You’re welcome to bring aboard cakes and pies, casseroles, and even cooked turkeys if you really feel like lugging one around.

The TSA does not allow softer, spreadable foods, such as peanut butter and other nut butters, jams, gravy, yogurt, and tofu, among others.

If you happen to make a killer gravy and absolutely insist on traveling with it, try freezing it first. Again, that gravy has to be rock solid when it reaches the TSA, so you might want to wait until the very last minute to remove it from the freezer before going to the airport.

The TSA also allows ice, including up to 5.5 pounds of dry ice so long as it’s properly marked and okayed by your airline, which would help keep your prized gravy frozen for the duration of the flight.

Another clever workaround? Divvy up your gravy (or salad dressing, etc.) into 3.4oz. containers to be sealed up in a quart-size bag as you would any toiletry. Remember, each passenger is allowed only 1 quart sized bag, so don’t show up with an industrial drum of gravy dispersed among 100 tiny containers.

For all your efforts to adhere to the rules, remember that the TSA is not exactly known for being consistent. What was allowed by an agent in Charlotte last year may not fly with the agent you meet in LaGuardia.

Those determined to plead their case to any uncooperative agents can cite the TSA’s own Can I Bring? feature—detailing what foods are and are not allowed—available on the TSA’s downloadable app or at TSA.gov. But even then, there are no guarantees.

You'll find the full guide on traveling with Thanksgiving dishes at LuggageHero.com. 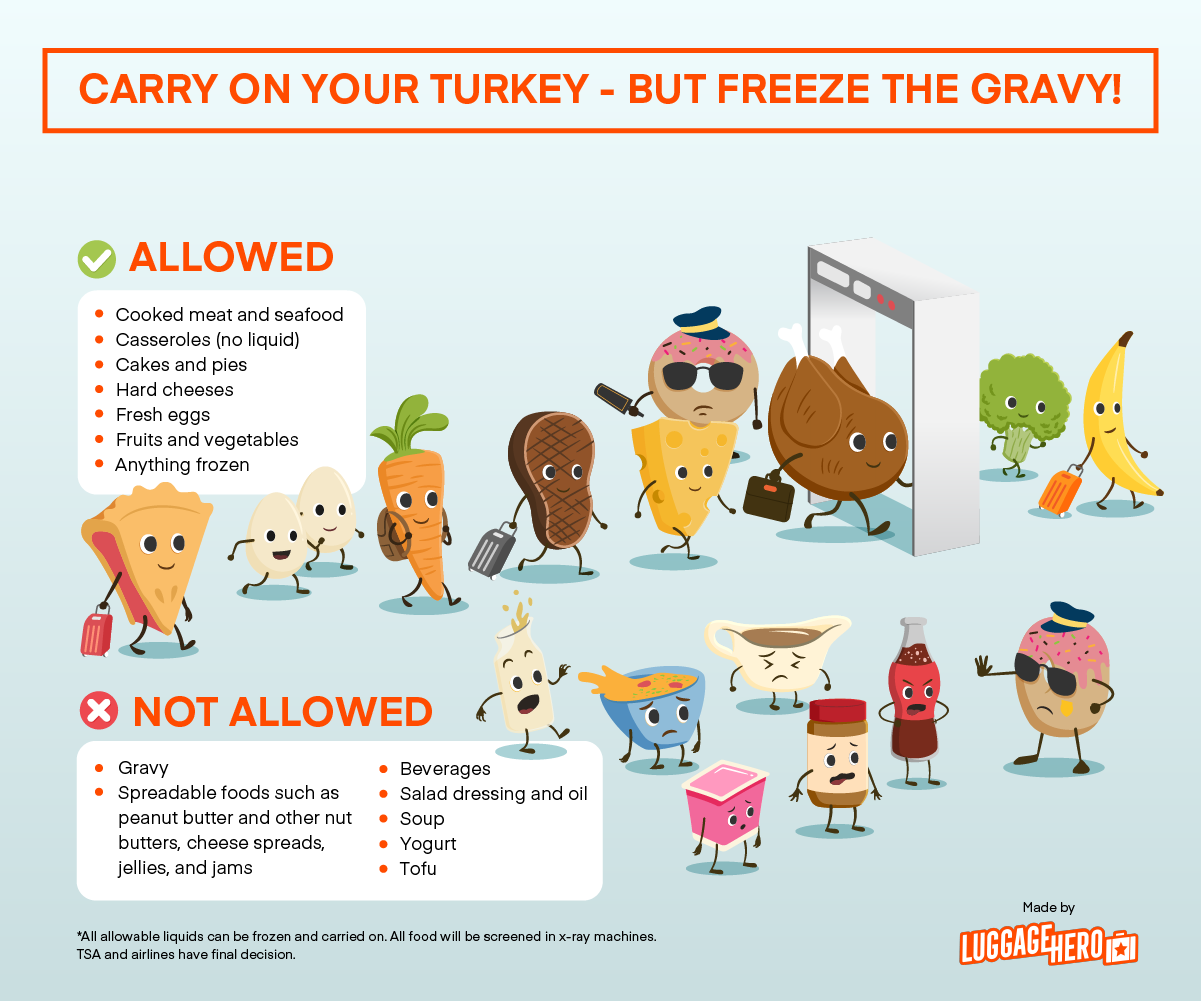 Above infographic by LuggageHero