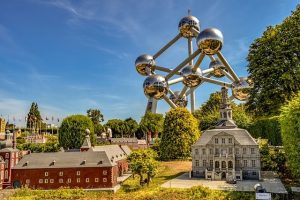 Nationwide Sale to Europe from $303+ Roundtrip on Legacy Airlines

We're seeing excellent flight deals to Europe from all over the U.S. today. Fares to select cities in Europe are in the mid-$400s from most U.S. airports—even small towns like Duluth (DLH) or Fayetteville (XNA). And there are even better deals in the $300s roundtrip from larger cities like New York (JFK), Miami (MIA), Dallas (DFW), and Seattle (SEA). Fares are as low as $303 roundtrip on legacy carriers.

The nationwide deals are on Delta/KLM/Air France from nearly every airport in the U.S. to a few Star Alliance hubs in Europe such as Brussels (BRU), Luxembourg (LUX), and Zurich (ZRH). If you live near a major hub city, there are some even better deals to these cities and a few other cities in Europe like Barcelona (BCN), Paris (CDG), or Rome (FCO). Some routes may be matched with similar fares by other carriers like American, British Airways, Lufthansa, or United.

Travel is mostly valid from November through March, excluding peak holiday travel. Travel to Europe on Sundays, Mondays, Tuesdays, and Wednesdays, and return from Europe on Tuesdays, Wednesdays, and Thursdays. A few routes from the major cities may have availability in April/May or only between January and March, and possibly for daily travel. You must take at least a one-week trip to get these low fares.

This sale is unadvertised and prices may jump at any time. Book now and take advantage of a 24-hour risk-free cancellation policy to confirm your plans.

As this is nationwide, there are plenty of other routes available as well. Look for price drops on flights to Europe from your city even if it is not listed.

These fares are Basic Economy, which means they only include carry-on bags and do not include advanced seat selection. A checked bag costs $60 each way. If you need to check a bag and/or want to choose a specific seat, consider upgrading to the Main Cabin Economy fare. It is generally $90 more roundtrip for an upgrade on the nationwide sale. Some of the lower fares from major hubs have a higher upgrade price of around $180 roundtrip or more.