Ski Season Sale on Delta with Fares from $141+ Roundtrip

Delta is having a great sale to ski towns in the west. As an added incentive, many resorts have exclusive offers if you purchase a Delta flight during this promotion. You can even ski for free in Aspen! Other cities in Colorado, Idaho, Montana, Utah, and Wyoming are included in this sale as well. Fares start at $141 roundtrip.

Deals to ski towns during peak season have been rare in past years, but we're seeing more and better deals for travel this winter. Book your trip to hit the slopes this winter now and save big.

The lowest fares are found for travel on Tuesdays, Wednesdays, and Thursdays, from January 8 through March 28, 2019. There is a 2-night minimum stay and a 30-day max stay on most routes.

Other airlines are matching on some of these routes, but flying Delta may allow you to get discounts on lift tickets or lodging. Aspen Snowmass is even offering a free lift ticket on day of arrival if you book with Delta during this promotion. Other offers are available in Jackson Hole, Salt Lake City, Steamboat Springs, Telluride, and Vail.

These fares all work in reverse as well and there are other connecting routes available from many cities across the country. Check out all of our flight deals to Ski Towns.

You may find even lower fares for travel on Tuesdays, Wednesdays, and Saturdays through March 6, 2019, with Delta's unadvertised fall/winter travel sale that has been lingering around for the past month.

Header image by Samot via Shutterstock. 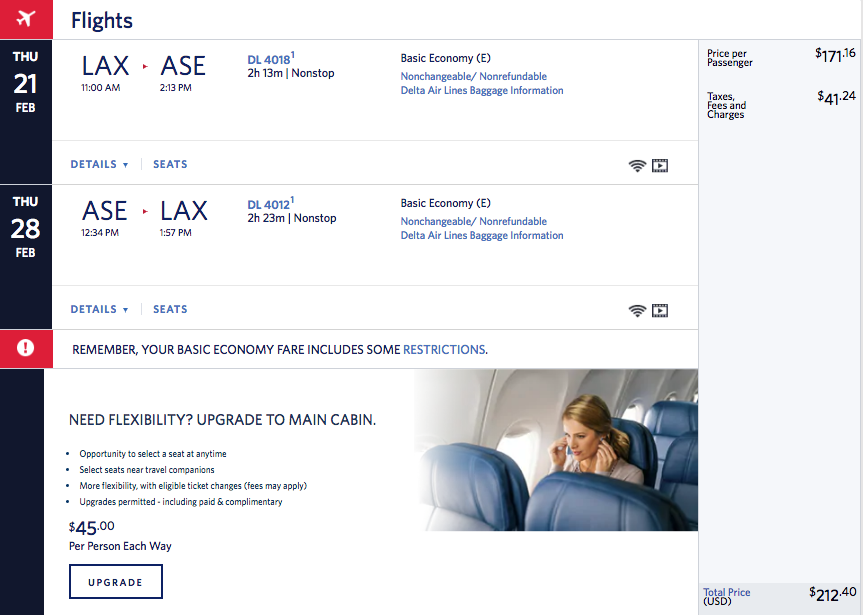