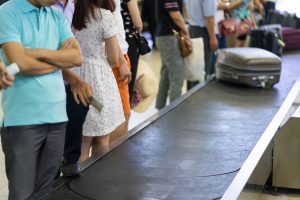 6 Common Travel Blunders and How to Fix Them

There’s a lot that can go wrong on the way from point A to point B, and even the slightest misstep can derail an entire trip. Still, it’s easy to recover from most mistakes with a little forethought. From lost IDs to flight cancellations, here’s how to prepare for—and bounce back from—common travel blunders.

Flight delays are a common annoyance, second only to outright cancellations. There’s no definitive way of knowing if your plane will leave on time, if at all, but you can get a pretty good idea by checking online with sites like FlightStats before booking. If your flight has a lousy on time performance, you might want to consider another option.

In the event that your flight is cancelled or severely delayed, spring into action as quickly as possible. While waiting in line to speak with gate staff, dial the airline’s 1-800 number or send the airline a message via Twitter. Some carriers are more responsive than others when it comes to social media, but it’s sometimes much faster (and way less frenzied) than any airport counter in the moments after a cancellation announcement.

There are few things worse than the moment you realize your bag won’t be coming down the carousel. Not much you can do to prevent the airline from losing a bag, but there are steps you can take to minimize the headache if it happens. For starters, keep a detailed record of what you’ve packed in the event you need to make a claim. Snapping a quick photo of your open suitcase would also do the trick.

Don’t pack expensive electronics and other valuable into your checked baggage. The fine print says airlines aren’t liable for these items, should anything happen. Instead, keep them close by in your carry on baggage. Certain credit cards may cover lost or stolen electronics. Check with your carrier to see what coverage is provided.

The maximum compensation for lost bags on domestic flights is currently $3,500. For international flights that number is nearly half. For that reason, those carrying expensive clothing and other pricey items may want to purchase additional coverage, also known as excess valuation. At around $5 for each additional $100 worth of coverage (usually maxing out at around $5,000), it’s pretty inexpensive.

In recent years, many airlines have been experimenting with trackable luggage tags to reduce incidents of lost luggage. Until these become the norm, you might consider attaching a Tile Mate tracking tag. These are far from perfect, but have been known to help passengers locate lost luggage. The real hurdle comes when trying to relay to your airline the location of a lost bag and how you know exactly where it is.

And if you'd prefer to keep your bag from getting lost in the first place, do what you can to make yours stand out from all the other carry ons out there. An eye-catching luggage tag, colorful sticker, or wrap around band doesn't cost much and can make a big difference. Better yet, choose a carry on in yellow, blue, red, or any other bright color unlikely to be missed by a baggage handler or at the carousel. Anything but black will do.

You Missed Your Flight

Whatever your reason for missing a flight, there’s still a chance of you flying. Airlines can be surprisingly accommodating to passengers who miss their flight, thanks to unofficial “flat tire” rules. Typically, agents will try and place late passengers on the standby list for same day flights, all without charging a fee. Again, this is all very unofficial, so don’t bank on it. And if you’re flying on a basic economy fare, or just a super cheap fare, definitely don’t expect the airline rep to work any miracles on your behalf.

If your issue is oversleeping or endless snooze button tapping, request a wake-up call from the front desk in addition to your phone alarm. Deep sleepers should ditch the iPhone and in-room clocks for a portable number for an impossible-to-ignore alarm, such as the aptly named Screaming Meanie Timer.

You Lost Your Identification

Sometimes a driver's license is briefly removed from a wallet and never put back. It happens, and sometimes it even happens en route to the airport. For a domestic flight, a misplaced ID is a relatively easy thing to fix. In this situation, the TSA will ask you to provide your name, address, and the last four digits of your social security number, and verify your identity through a series of follow up questions based on their search results. Tedious and maybe a tad creepy, but at least you’re on your way.

This definitely won’t work for international flights. Show up sans passport and you’ll be turned away. Again, Tile Mate's slimmer model slipped into your passport case or wallet would save the day in this type of scenario.

You Didn’t Realize Your Ticket Was Basic Economy

Families and couples who unknowingly booked basic economy seats should not expect to be seated together, as basic economy does not include seat selection. Gate agents and flight crew probably won’t be very sympathetic either. You may have to resort to sweet talking and/or bribing fellow passengers to swap places, which would be especially tedious if seated in opposite sections of the plane.

Both Delta and American allow basic economy passengers to bring a carry on and personal item, but United will force you to gate check your carry on and impose a penalty fee for doing so.

Your Carry On Doesn’t Meet Requirements

Carry ons will be scrutinized at check in as more airlines embrace basic economy ticketing and the low cost model.  If your bag dimensions exceed what is allowed by your carrier, you may be forced to check it and pay a fee. When shopping around for carry ons, the TravelPro Crew rollaboard is a safe bet considering it's used by crewmembers at over 90 airlines worldwide.

If weight is the issue, you can try to quickly reconfigure your packing strategy by wearing your heaviest bulkiest items for the flight. Airport scales have also been known to make errors, with some so wrong they've had to be recalibrated. It wouldn’t hurt to double check the weight with a portable scale of your own, such as this one.

Above image by Vietnam Stock Images via Shutterstock