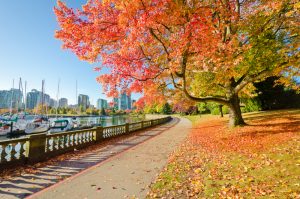 7 Places to Go Before Winter

Summer is gone and winter is around the corner. Before temperatures drop to freezing, you’ll want to check out these seven cities.

Cities to Visit Before It Gets Cold

Fall is a perfect time to visit places that are usually extra high priced during peak summer to compensate for minimal visitors during the winter. You’ll find cheaper airfare and accommodations in shoulder season along with tolerable temperatures and some nice fall foliage to boot. You don’t need to travel to Europe to enjoy an old-world setting. Montreal is often described as the most European city in North America, and with attractions like the Notre-Dame Basilica in Old Montreal, you may feel like you’re strolling the streets of Paris. Make sure to visit Mount Royal Park for extraordinary views from above the city. The park was designed by Frederick Law Olmsted, who also designed New York’s Central Park.

Where to Stay: For a home-like feel, stay at the Victorian Heritage. It may not look appealing from the street, but once inside you’ll feel like royalty. The hosts at this B&B are very accommodating and you’ll be within walking distance to most of Montreal’s sites.

Flights to Montreal: Flights to Canada, in general, have started to come down in the past few years. Since all the major U.S. airlines fly to Montreal, along with Canadian carriers like Air Canada, Porter, WestJet, and Air Transat, it’s easy to find a decent connection to Montreal. Milwaukee is the home of Miller, one of the largest beer companies in the U.S., and also many micro-breweries, which make this town a haven for those who enjoy a cold one. Other than the many brewery tours available, you can see some fascinating exhibits at the Milwaukee Art Museum or enjoy a stroll along the Lakefront Trail.

Where to Stay: Centrally located downtown, the elegant Pfister Hotel has been around for 125 years.

Flights to Milwaukee: Milwaukee has surprisingly cheap flights for not being a major hub city. Southwest and Frontier have many nonstop routes to Milwaukee that compete on price with airlines flying to nearby Chicago. As this is the most northern city on this list, you’ll want to visit sooner than later this fall. The Baltic Sea does regulate the temperatures somewhat and you’ll be within cruising distance of the medieval town of Tallinn, Estonia should you wish to add another stamp to your passport. Headbangers will enjoy Helsinki’s nightlife scene with some of the best rock and heavy metal music venues in the world.

Where to Stay: Unwind with the simplistic Scandinavian design at Scandic Paasi, which is located in a quiet square. You’ll have easy access to public transportation and each room is decorated differently, which is a great change of pace from the mundane rooms of a chain hotel.

Flights to Helsinki: Since this is the hub for Finnair, which is one of the major airlines in the Oneworld alliance, there are often excellent prices to Helsinki during the increasing number of fare wars to Europe. Look for cheap flights connecting in Europe from the competing Star Alliance (United, Lufthansa, etc.) and SkyTeam (Delta, KLM, etc.) alliances. Finnair has also added more nonstop options between North America and Finland, which you can easily connect to from American Airlines cities. When people dream of a trip to the Far East, Beijing is often near the top of many lists. The capital of the most populated country on earth has exquisite architecture and plenty of street market shopping. Beijing is also a jumping off point for tours of the Great Wall of China and home to The Forbidden City. If this has been on your bucket list, take a trip to Beijing before the weather turns frigid.

Where to Stay: The New World Beijing Hotel has all the amenities you’d expect of a five-star hotel at an affordable price. Spacious rooms, an indoor pool, breakfast buffet, and a rooftop bar make this a favorite hotel in central Beijing.

Flights to Beijing: You’ll be surprised at how cheap it is to fly to Asia these days. The huge influx of Chinese airlines flying to the U.S. has drastically lowered fares on all airlines. Air China has nonstop flights to Beijing from major hubs, which other Chinese carriers such as China Eastern or Xiamen often undercut with super cheap connecting flights. American, Delta, United, and Air Canada often compete with great prices and more familiar service from all over North America.

See all of our current fares to Beijing (PEK) from all over the U.S. and Canada Portland is a pleasant place to visit to enjoy the great outdoors. Take a day trip up the Oregon Coast or down to see the Columbia River Gorge and Multnomah Falls. Inside Portland, you can visit the fascinating Japanese Garden or indulge in Portland’s multifaceted food scene. From wine tasting in Willamette Valley to a brewery tour on bike, you’ll never run out of things to do in Portland.

Where to Stay: For a luxurious stay, book a room at The Benson, a Coast Hotel. The property has a classic feel with an impressive lobby and spacious suites. It’s located in the center of town within walking distance to all the great shops and restaurants that Portland has to offer.

See all of our current fares to Portland (PDX) from all over the U.S. and Canada There’s more to Buffalo than wings and snow. Visit Buffalo’s revamped downtown waterfront for family-friendly activities like free outdoor concerts or a tour of the naval ships at the Buffalo & Erie County Naval and Military Park. Just outside of Buffalo, you can see one of the natural wonders of the world at Niagara Falls. Experience the power of the falls with a visit to the Cave of the Winds or a cruise on the Maid of the Mist.

Where to Stay: By staying at the Buffalo Marriott Harborcenter, you’ll be just steps away from the waterfront and Canalside. Rooms with views of the harbor are available and you’ll find all the modern amenities you’d expect from a major hotel brand.

Flights to Buffalo / Niagara Falls: JetBlue often has low fares to Buffalo with connections via Boston or New York. Frontier recently entered the market with the first ultra-low-cost service into Buffalo’s airport from a few cities you might not expect. Spirit Airlines also offers super cheap flights to Niagara Falls (IAG) airport on a limited schedule. Whether you enjoy the mountains, beach, or city life, Vancouver has it all. Stanley Park is a favorite place to visit for many travelers to enjoy all of the nature that this region offers. There are also many harbor cruises you can take including whale watching tours or a combo sea plane/ferry trip to Victoria island. Museum lovers will find plenty of art galleries, history, and specialty museums in Vancouver such as the Museum of Anthropology and the intriguing Spirit Wrestler Gallery, which showcases contemporary directions in aboriginal art.

Where to Stay: For a retro style stay in a friendly environment, stay at The Burrard while in Vancouver. The central courtyard is full of luscious greenery and even features a community ping pong table. The hotel offers free bikes for guests to easily get around town and has pet-friendly rooms so you can bring your furry friends along.

Flights to Vancouver: The recent addition of ultra-low-cost service to nearby Abbotsford (YXX) on both Swoop and Flair Air has really brought airfares down to Vancouver (YVR) on the larger Canadian airlines Air Canada and WestJet. The major U.S. carriers, American, Delta, and United, also often have fare wars that bring low fares from all over the U.S. to Canada’s west coast hub.

Header image by romakoma via Shutterstock.