WOW air is back with another promo code sale to Europe. Save 40% off a portion of your next roundtrip flight on WOW Air for fall/winter travel. This sale also works on new WOW Air service to India.

Enter promo code WOWEUROPE when booking on wowair.com to apply the discount to the base fare of the outbound flight on a roundtrip purchase. Your inbound flight and taxes/fees will not be discounted. The promo code will discount travel between October 1, 2018 - February 10, 2019. Peak holiday travel in late December and early January is mostly blacked out.

This is the first time we're seeing WOW Air's new service from Orlando and new service to India being discounted in a promo code sale. Other airlines may offer a better value on some of these routes so make sure to compare total cost with other airlines before you purchase.

Even with WOW Air's many fees, some of these routes don't see that many flash sales on other airlines and WOW Air can still often be the best price after you add in any extra fees that are necessary. WOW requires that you sign up for the free MyWOW membership to purchase fares using a promo code. All you need to do is give your email address and agree to receive a newsletter.

The discount seems to work on all routes to Europe and India, but nonstop service to Iceland is not being discounted with this promo code. Some routes are operated on limited days each week and a few are seasonal with service ending in October. These routes may return next summer but there is no guarantee, so get in on these low fares while you can. Click on the fare details below for more info. 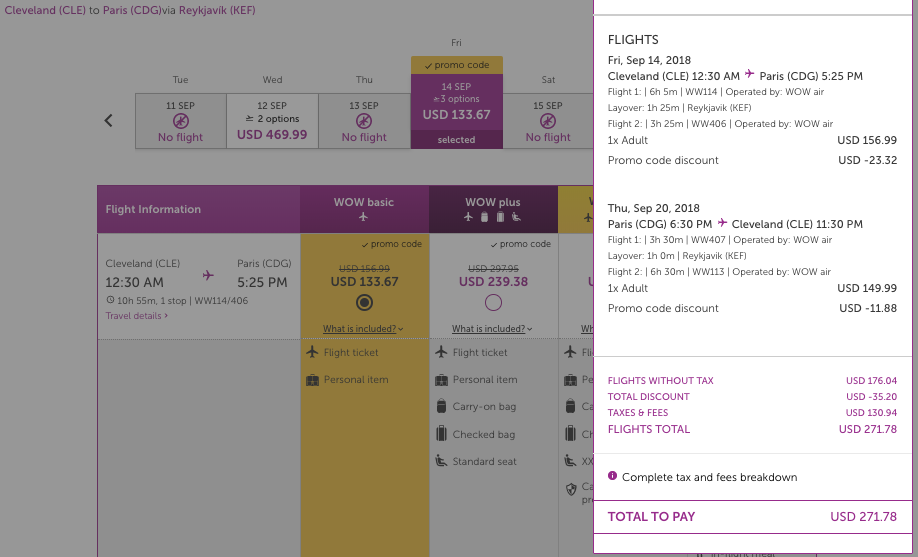