While it looks like American and other Oneworld partners have backed down on the fare war to Europe, Delta and its cohorts in Skyteam are still going strong. Here's another deal to a destination that's definitely worth the visit and rarely goes on sale.

Fly from New York-JFK to the Mediterranean island of Malta for $477 roundtrip on various Skyteam partners through May 2019. Not sure who's a Skyteam member? Have a look at our guide to airline alliances and give yourself a refresher.

Flights at this price point are available daily starting in late October through the middle of May. Certain days may price a few dollars more depending on which airport you connect through. Some itineraries may require long layover or two connections so avoid those if possible. Pack those extra outfits because these fares include one free checked bag along with your carry-on allowance.

As an example, searching via Google Flights, I found seats departing JFK on January, 29 and returning from MLA on February 7, 2019. Malta has a warmer temperature than mainland Europe so if you head there in late April and May you might be able to sneak in some beautiful beach days if the winds cooperate.

These discount deals to Europe keep rolling in so if you haven't bookmarked or visited our Europe Flight Deals page, you're really missing out. If you have any plans on touring Europe soon, you'll find all the best deals listed there daily.

Need a place to stay on your island getaway? Here's what's available in Valletta on Hotelwatchdog. 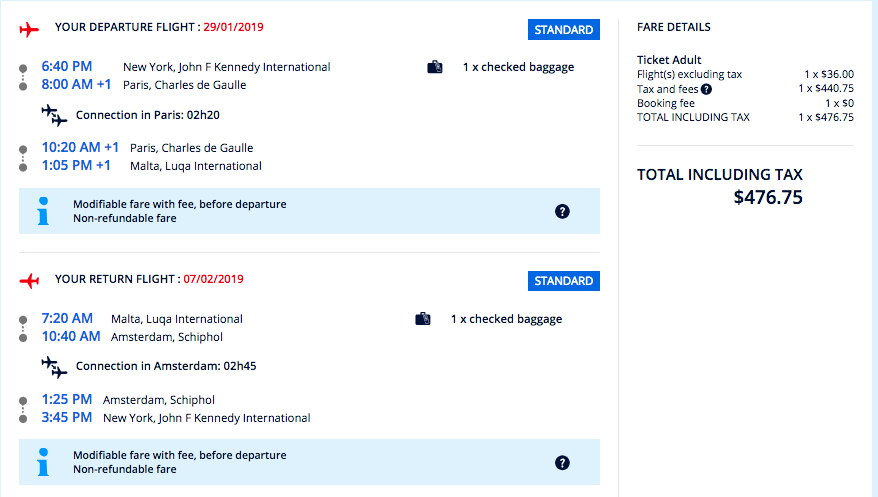