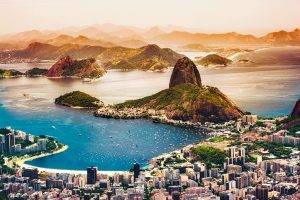 Cheap Flights to Brazil for Carnaval from $454+ Roundtrip; Other Times $341+

There is a small fare war to Brazil today. Delta has lowered fares from American hub cities for year-round travel to Rio de Janeiro (GIG) and Sao Paulo (GRU), including Carnaval travel dates. In response, American and LATAM Brazil have lowered fares from Delta's main hub in Atlanta (ATL) to cities all over Brazil. There are also price drops on other airlines from various cities. Flights to Brazil for Carnaval are starting at $454 roundtrip. If you want to travel other times of the year, flights are as low as $341 roundtrip.

New service on GOL starting in November and additional service from Avianca and Azul seems to be bringing more price wars on flights to Brazil. Some of these fares have been around before, but today is the first time in a while that we've seen a flash sale from hub cities in Atlanta (ATL), Charlotte (CLT), Dallas (DFW), Philadelphia (PHL), and Phoenix (PHX).

Travel dates and restrictions vary by route but many of these fares are valid for year-round travel. Peak travel around the holidays in December/January is generally blacked out on all routes, but many of these prices can be booked for a trip over Carnaval. Click on the fare details below for more info.

Rio de Janeiro and Salvador host the biggest festivals, but Brazilians celebrate Carnaval in the entire country. Carnaval takes place between March 1-9, 2019, but celebrations begin well before that in Brazil. Fat Tuesday will be on March 5, 2019.

This is an unadvertised sale and fares may jump at any time.

Fares available for travel around Carnaval include:

For more deals to Brazil, have a look at all of our fares to Rio de Janeiro (GIG) and Sao Paulo (GRU).