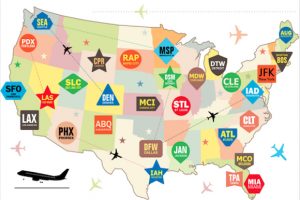 15 Weird Airport Codes and How They Came to Be

You’ve seen them on your flight ticket, baggage tag, or just by searching on your favorite booking website; those three capitalized letters prominently displayed next to any and every city’s airport. Assigned by the International Air Transport Association (IATA), these unique three-character codes are used in the aviation world to logistically and easily identify a specific airport. Easily applies to airports like Boston whose code is BOS, and SEA for Seattle, but not all airport codes are as simple to figure out as your ABCs. There are handfuls of IATA identifiers in America that will leave you scratching your head on how they actually came up with such confusing city codes.

Looking for tickets to the Big Easy for Mardi Gras? Start typing New… into your flight search window and you’ll be greeted with New York, Newark, even New Delhi before you’ll see New Orleans populate. However, if you’re in the know and type in MSY, you'll get New Orleans to show up right off the bat. So how did the IATA derive MSY from the city name of New Orleans? It’s not from Cajun-Creole; it's from the airport's previous incarnation as Moisant Stock Yards. Makes sense now.

Across the country, there are numerous other airports whose city names and codes just don't seem to quite match up. So here’s a rundown of some of the United States most puzzling and unusual airport codes, with explanations on how they ended up with their sometimes-mysterious three-letter identifiers.

Established as Berry Field in 1937, Nashville’s airport was in dire need of an upgrade and modernization by the 1980’s. With the construction of the new terminal, the airport took on its current name as Nashville International Airport. But its BNA identifier remained the same; the B stayed for Berry Field while the NA for Nashville.

Across the Ohio River from Cincinnati, you'll find the city of Covington, Kentucky, which is where you'll also find the officially named Cincinnati/Northern Kentucky International Airport. While the airport is technically in Hebron, Kentucky, Covington was the closest city at the time of construction and therefore assigned CVG from the International Air Transport Association.

ECP – Everyone Can Party – Panama City

Here’s my personal favorite. Opened in 2010, Northwest Florida Beaches International Airport had their eyes set on IATA code TFB, standing for “The Florida Beaches” only to find out that a small airport in Papua New Guinea already laid claim to the three-letter marker. So rumor has it officials at the airport went down the list of available codes and selected ECP, jesting "Everyone Can Party" to tie into the area's penchant for attracting Spring Break revelers.  Another tidbit: despite having International in its official title, there are no international flights scheduled at ECP yet.

Chew on this. Here is an unforgettable airport code once you know what it stands for. Fresno Yosemite International Airport gets its Weird Al Yankovic approved FAT letter code from its former name as Fresno Air Terminal.

Washington state's second busiest airport, Spokane International, inherited its GEG identifier from Army aviator Major Harold Geiger. Once known as Sunset Field, after acquisition from the Department of Defense the airfield was renamed in honor of the aviation pioneer Geiger in 1946. In 1960, the airport was renamed once more to its current Spokane International Airport but retained its IATA- issued GEG code.

Once the hub of Mid-Continent Airlines, MCI is one of the only airports to be assigned an IATA code based on an airline. It was short-lived, however, as Mid-Continent merged with Braniff in the early 1950’s but the Mid-Continent International named had already been decided and stuck. Now Kansas City International Airport, the MCI initials still serve as a good indicator of where it’s located.

This one-time Air Force Base closed in 1975 but was revived like Sleeping Beauty following the opening of nearby Walt Disney World. Currently known as Orlando International Airport, the MCO airport code remains in lieu of former occupant McCoy AFB. If you were wondering, code ORL is already taken by Orlando Executive Airport, which is mainly used by small private aircraft.

While frequently referred to as HIA, don’t get fooled. Harrisburg International Airport’s official code is actually MDT. The MDT comes from Middletown, the suburb of Harrisburg that once housed the Middletown Air Depot. If you were curious, HIA is already taken by Huai’an Lianshui Airport in China, so make sure to double check your luggage tags because that’s a long way to go for a lost bag.

Maui wowie, how did they ever come up with OGG? It turns out Kahului Airport's code pays homage to flying ace and Hawaiian Airlines pilot Captain Bertram “Jimmy” Hogg. Hogg operated the company’s first trans-Pacific flight and to honor the aviation pioneer, Maui’s major airport was bestowed with the OGG initials in 1957.

While some of the letters look like they’d match up to its current name O’Hare, ORD was actually assigned its IATA code from its former life as Orchard Field Airport. Following World War II, the complex was renamed after Medal of Honor recipient Edward “Butch” O’Hare, but since ORD was already in the books, the airport’s code remained unchanged.

Initially named after founding father and Virginia native Patrick Henry, it was only fitting for IATA to issue out PHF for Patrick Henry Field. Fast-forward to 1990 when the airport was renamed Newport News/Williamsburg International Airport. The PHF doesn't quite match as smoothly.

Opened in 1983, the then Southwest Florida Regional Airport was issued RSW for the Regional Southwest part of the airport's official title. Ten years later, the airport swapped out the Regional to International, and now the R in the RSW doesn't make as much sense. For the record, FTM is still open as an available IATA code, but changing it at this point would be more hassle than it's probably worth.

Another instance of a military airport turned over to the local air authorities after ceasing operations. In 1947, the Louisville Air board opened up commercial service at Standiford Field, which eventually switched to Louisville International Airport in 1995. While the official name changed, the decades-old SDF code remained. SDF is home to the UPS (United Parcel Service) Worldport, making it the third-busiest airport in the United States in terms of cargo traffic.

Another Florida airport to make this list with a somewhat confusing code, this Allegiant Air focused airport serving the Florida Panhandle is officially name Destin-Fort Walton Beach Airport. So how did they ever drum up VPS? Simple, the airport’s first passenger terminal opened on the east side of the airfield situated in the small town of Valparaiso, Florida - hence the VPS three-letter code.

Are there any other airport codes that you’re curious how they came to be? Leave your comments and suggestions below.

Header image by Savgraf via Shutterstock.com