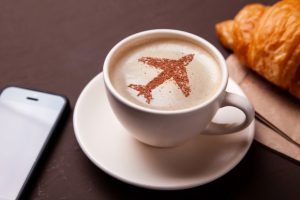 Pumpkin Spice is Now in the Air. You Should Be Too.

Do you smell that crisp autumn air and the feeling the crunch of leaves beneath your boots? Probably not right this moment. Considering summer is still full swing, and we haven't even reached Labor Day yet, but nobody at your local coffee shop got the memo. Today is August 28th and according to your barista buddies, it's now officially PSL season. Yep, everyone's favorite seasonal sip, Pumpkin Spice Latte is back on the menu at Starbucks and soon every other coffee shop that wants to join in on the Instagram and hashtag parade.

The iconic drink that signals the start of fall is getting a jumpstart this year with its earliest debut since the coffee giant started offering the 15 years ago. In honor of the launch and soon to be a never-ending feed of snaps of names misspelled on PSL cups, we at Airfarewatchdog.com have priced out a cornucopia of fantastic fares that you could buy if you trimmed down your latte obsessions and spent that "for the price of a cup of coffee" money on airfare.

Some gourd autumn nonstop fares include:

New York-JFK to Portland, ME for 24 Pumpkin Spice Lattes ($117 roundtrip)

Seattle to Portland, OR for 26 Pumpkin Spice Lattes ($127 roundtrip)

If you can’t go without your caffeine fix, then feel free to book these discount deals anyways. But make sure to bring your PSL onboard, because to the best of my knowledge there isn’t an airline that serves them at 35,000 feet… yet.

Header image by ADragan via Shutterstock.com