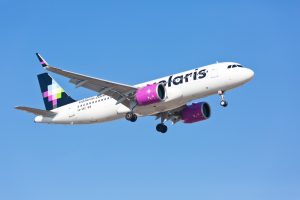 From Volaris: Up to 40% Off Promo Code Sale for Winter/Spring Travel

Get a jump start on your spring break plans. Take 40% off your next flight on Volaris for winter/spring travel to Mexico and Central America. Fares start at just $208 roundtrip.

Volaris is a low-cost Mexican airline, but has a baggage policy that is similar to the major US airlines. The main difference is that the lowest clean base fare has a weight limit of 22 lbs total between your personal item and carry-on. Extra weight allowance for your carry-on bags can be purchased starting at $18 each way. Checked bag fees start at $23 each way.

On some routes, you may find a better value on other airlines, so search other sites to see if the major airlines have lowered fares in response to this sale.

To get these fares, you'll need to select the "Up to 40% off" promo or just enter promo code VPN40 when booking on Volaris.com for travel between February 1 and March 31, 2019.

Many routes are only operated on limited days each week. You may have to adjust your travel dates to find flights. Click on the fare details for specifics.

Portland, OR to Cancun $350 roundtrip

There are many more routes available from/to locations where Volaris operates. Have a look at all of our deals on all airlines to Mexico City, Guadalajara, and Cancun.