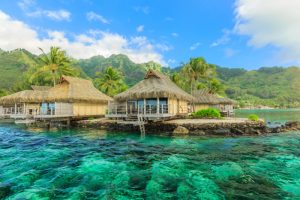 Airfare to Tahiti is dropping considerably this year. Flights that used to cost thousands of dollars are now as low as $629 roundtrip from west coast cities and in the low $1,000s from all over North America.

Most of these incredible deals are on United. Some of the lower fares use a combo of Alaska Airlines and United. Delta/Air France have low fares from Bay area cities and Los Angeles.

Travel is valid from November through March, excluding peak holiday travel. Travel on Alaska/United is via San Francisco on Sundays, Tuesdays, and Thursdays. Travel on Delta/Air France is via Los Angeles to Tahiti on Tuesdays, Thursdays, and Saturdays; and from Tahiti on Sundays, Wednesdays, and Fridays. There may be a 1-month max stay for these prices.

Fares are unadvertised and may jump in price at any time. Book quickly to secure your trip to paradise.

Similar deals are available from all over North America, large and small airports included. For more deals to French Polynesia and Tahiti, check out all of our fares to Papeete (PPT).

Even if your city isn't listed, it's likely much lower than normal, so check prices from your local airport within the travel dates listed above.