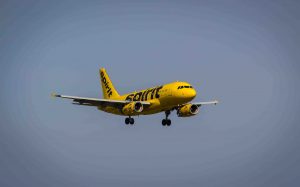 Spirit Airlines has a promo code valid for puchase through July 4th. Save up to 40% off the base fare for travel this summer and fall. Fares start at just $66 roundtrip.

Just enter promo code 40PCT when booking on Spirit.com to apply a 40% discount to the base fare for travel on Tuesdays and Wednesdays, from July 11 through August 29; and Mondays, Tuesdays, Wednesdays, Thursdays, and Saturdays, from September 4 through November 14. Avoid blackout dates on October 4, 6, and 8.

Although we've seen better prices in past promo code sales, this promo code does discount summer travel, which usually is not included in the better promo code sales. Lowest available fares are generally not available during peak summer months, but flights will still be discounted.

The discount will only apply to the base fare and not to taxes nor Spirit's booking fees so don't expect to see that large of a price drop on most routes. There is also a large list of excluded markets in this sale.

Above image via Spirit.