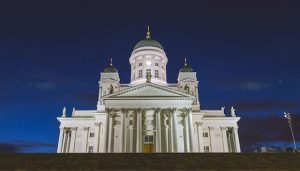 According to several studies and surveys, head to the happiest country in the world - Finland. Fly from Los Angeles to Helsinki for $447 roundtrip on SAS Scandinavian Airlines.

While other airlines are offering comparable prices, most don't include free checked baggage like this fare posted by SAS. Flights at this price start from early October through early April of next year, with blackouts during the holiday season. Travel is available daily, but days vary per month. As an example, I found seats departing LAX on November 10 and returning from HEL on November 17, 2018. If you're hoping to see the Northern lights this winter, this fare could serve as a good base to get you to Helsinki, and from there you can make your way further up north to Lapland for a glimpse during the polar night.

If you're too used to the California weather and not a fan of the cold, have a look at all our flight deals from Los Angeles (LAX) to warmer climates.

Need a room in the Finnish capital? Here's what's available on the mentioned dates from Hotelwatchdog.