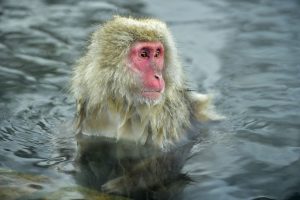 The Japanese Alps in Winter Offer Snow, Sake, and Monkeys in Hot Springs

It was coming on winter in Los Angeles, and I was missing snow. Boston-born, I missed snow’s ozone aroma (snow does have a smell, you know). I missed its soft crunch under my feet. And coincidentally, I was also missing Japan, a land that has fascinated me ever since third grade when, for a show-and-tell project, at the suggestion of Mrs. Reggolino, who also had a Japan thing going on, I built a traditional Japanese home out of balsa wood and paper, complete with shoji screens (yes, I was a precocious child). Some places I visit only once and see no need to return. Others, like Japan, I have visited multiple times. I love the food and culture but mostly I love the people and the respect they show each another and to visitors.

For example: although children are as rambunctious here as anywhere, in the Japan Airlines airport lounge once I noticed a mother bringing her fidgety child inside an enclosed phone booth to avoid annoying others (and listened enviously to a public address announcement asking people to make mobile phone calls inside those booths for the same reason).

One memorable visit to Tokyo, in 2011, hadn’t gone as planned. My friend David and I landed on March 12. The next day found us at Tokyo Disney. And then the largest earthquake ever recorded struck. All the trains stopped running, and that night we spent shivering in a light drizzle until the park thought it safe to shelter us indoors. The following night we dined on Kobe beef at the Park Hyatt Tokyo watching the wine in our glasses shimmer slightly with each aftershock. The following day I was on American Airlines back to LA.

And while I’d visited many times since then, I’d never made it beyond Tokyo.

Snow, Onsens, and Monkeys in the Japanese Alps

So here I was again, this time in the depths of winter, in the Japanese Alps, and there was snow, freshly fallen and deep. My journey took me to Tsumago, Magome, Takayma, Shirakawago, and Gokayama, getting around by train and road.

I knew about Mount Fuji (you can see it from Tokyo on a clear day) but I had no idea until I opened my Michelin Green Guide that Japan consists mostly of sparsely-inhabited mountains, or that they get so much snow. In fact, I further learned, mountains cover two-thirds of Japan and most of these areas are uninhabited, so 127 million people live in the remaining topography.

Tsumago-juku, an old “post town” surrounded by mountains, is one of the 69 such towns along the Nakasendo, a stone-paved route dating from the 17th century, designed to connect Edo (modern day Tokyo) and Kyoto. Today, many of the original historic buildings remain.

In one of them I encountered Jun Obara, a true local “character” as my friend Sumiyo called him as we left his shop house. He grew up in Tsumago (population 600), studied art and fashion in Tokyo, and returned to look after his elderly parents. In the traditional house of his birth, one of 223 restored and preserved buildings in the town, he makes men’s and women’s clothing in fabrics, patterns, and color combinations like nothing you’ve ever seen. He designs and weaves the cotton fabric himself (he won’t reveal where the yarn originates) in patterns he designs. He even built the loom they’re woven on. The iridescent fabrics in greens, blues, and burnt orange, one of which depicts Edo-era firemen, based on historic drawings, will definitely get a conversation going anywhere in the world. He’s opening his first purpose-built shop in Osaka this spring and some of his creations are one of a kind. “I just want to support myself doing something I love,” he tells me with Sumiyo translating.

From Tsumago I visited Magome, another post town of restored traditional homes and shops, about a three-hour walk along the Nakasendo (you can also travel by bus, and for $5 the tourist office will forward your bags between the two towns if you do opt for a stroll). Here, among other relics, I saw a mill wheel powered by water melting from the mountain snow, once used for grinding grains. Many structures date from the 17th and 18th centuries.

In Takayama, surrounded by mountains reaching 10,000 feet in altitude, I visited several local sake breweries offering tastings, one of which has been in operation since 1695, and a museum housing the elaborately-decorated floats paraded through town each year during twice-yearly festivals. Gourmets, however, come here for the area’s famous fork-tender hida beef which, some say, rivals better-known Japanese varieties. The trip from Takayama to Shirakawago and Gokayama, both UNESCO World Heritage sites, will take you three hours along mostly traffic-free, two-lane roads, or you can take a coach tour if you’d prefer not to drive. The larger and busier of the two, Shirakawago, sees over 30 feet of snow each winter, making it one of Japan’s snowiest regions. Both are famous for their gassho-zukuri farm houses, dating from the 18th and 19th centuries, with steep thatched roofs designed to prevent snow from gathering. Many of them welcome overnight guests, providing food and lodging (you’ll be sleeping on traditional futons and using shared facilities), for between $50 and $100 a night with breakfast and dinner, while others offer tours. The nearby and less-developed Gokayama sees fewer tourists and when I toured Suganuma and Ainokura, two smaller gassho-zukuri villages in the area, I was only one of a few visitors and I could enjoy strolling around without distraction. The last stop on my tour, before heading back to Tokyo by Shinkansen bullet train from Nagano, was to Jigokudani (roughly translated as “hell’s valley” owing to its active hot springs spewing constant plumes of sulfurous steam), home to wild troops of Japanese macaque monkeys that, in winter, enjoy steeping in the warm waters. On my visit the monkeys were merely drinking from a pool of steaming water rather than bathing in it, as camera-toting visitors waited patiently, but to no avail, for the creatures to jump in. Perhaps the air temperature wasn’t quite cold enough.

Speaking of cold, yes it’s pretty chilly in the Japanese Alps in wintertime, so bundle up. But they’re also beautiful in spring, summer, and especially in the fall when the foliage is in full color. On my next visit to Japan I hope to explore other rural areas. Tokyo is exciting and fascinating, but hop on a train and in few hours you’ll be in a whole different world.