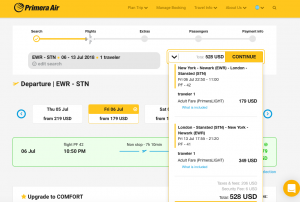 It may seem a tad premature to begin planning your summer vacation in March, but summer fares to Europe are shaping up to be some of the lowest we've ever seen.

How cheap is cheap? We’re talking transatlantic flights for under $600, and many of these are nonstop. That's quite a drop from the $1,200+ economy fares we typically see in the summer months.

And no, these cheap summer flights aren't all on budget carriers, though they’ve certainly had a hand in bringing down prices on legacy carriers.

Of course, another reason summer fares may appear lower at first glance this year is the sudden increase in international basic economy seats. I’ve tried to avoid including these with the exception of Delta, which, unlike other carriers, does include carry on baggage in basic economy. That, along with an additional personal item/small bag, is often enough for light packers and budget travelers.

Below are a few examples of what we’ve spotted recently from airports across the U.S. Checking United, we found seats departing JFK on Tuesday, August 7, returning from AMS on Wednesday, August 15. This appears to be the cheapest summer option, with higher fares available in June and July.

See our New York JFK fare listings for cheap fares like this one. Check out our Miami MIA listings for a look at similar finds. Yes, this is a basic economy fare, but as I mentioned above, Delta’s version of basic economy includes a carry on bag. But be sure to cram all that you can in that one carry on because Delta’s checked bag fee for this trip is a whopper, at $60 each way.

We found seats departing MSP on Monday, August 13, returning from CDG on Tuesday, August 21. Other dates are available for travel throughout August. Searching United, we found seats departing LAX on Wednesday, August 15, returning from CDG on Thursday, August 23. This flight is operated by Air Canada and connects via Vancouver outbound and, on the return, Montreal. Similar fares are available throughout August.

See our Los Angeles LAX listings for a look at current fares. Depart SFO on Monday, August 13, return from LHR on Tuesday, August 21. Seats are scarce at this price, with greater availability in late August for $625 nonstop.