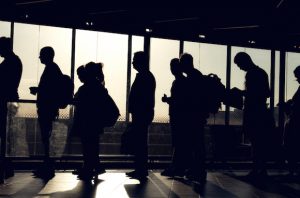 Don't Miss Your Flight! How to Beat Long TSA Lines

While we wait for the TSA to fix this (mainly by adding more employees and keeping the ones they have from quitting) here are some strategies to make sure you don’t miss your flight.

Obviously get to the airport super early. If you hate waiting at airports this might be a good time to splurge or an airline lounge day pass. American, for example, charges $59 for a one-day pass.

Plan to arrive at the very least 2 hours before boarding for domestic, 3-4 hours international.

But for some airports, such as Miami when the cruise ships come in, even 2 hours might not be enough.

Perhaps the best advice is to sign up (now!) for TSA Precheck or Global Entry. I prefer Global Entry because it includes Precheck and it’s good for 5 years for a $100 fee. Some premium credit cards, such as the Amex Platinum Card, reimburse the fee.

The only problem with Precheck is that at some airports the special lines are only open for a few hours a day, again because of staffing shortages. But not only are the lines much shorter than regular TSA lines, but you don’t have to take out your laptop and liquids, and you can leave your shoes and light jacket on.

Another hack: buy priority access to TSA lines such as JetBlue's "even more speed" —which gives you expedited lines through TSA.  United has a similar program called Premier Access, which starts at $15. Delta calls it “Sky Priority” and it’s available at select airports.

Fly from less busy airports. If you live on Long Island, fly from Islip rather than from JFK, for example. Long Beach usually has shorter lines than LAX, and so on.

Try to fly on a Tuesday or Wednesday when airports are less busy. Some times of the day (such as midday) are slower than during the morning and evening rush, so lines should be shorter.