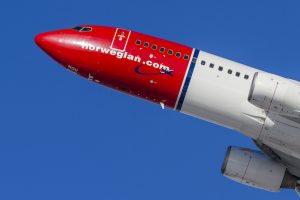 Everyone Needs to Relax and Book a Flight on Norwegian

An old pal, who now lives halfway around the world, messaged me the other day. What am I up to lately, and what did I think of joining them in Paris for a little reunion, over an upcoming weekend? Until relatively recently, I'd have said thank you, but no sale—who could afford such a thing? This time, however, I opened up my Norwegian app, found a round-trip fare for $330 from Newark, and texted them back, seconds later. Absolutely. I'll see you there.

Truly, these are exciting times for those of us who like to travel affordably, in order to travel more—Norwegian, WOW Air, Icelandair, and, soon—reportedly—Primera Air, which most of us have probably never heard of (it's a real thing, promise), will all be doing battle with the major carriers on the Transatlantic front.

This is why you end up finding upcoming fares for $281, also round-trip, between, say, Providence, and Ireland, It's why more travelers in cities like Seattle can get to London for around $400 round-trip, over the winter.

Want to go from Denver to Europe, with a stop-off in Reykjavik to swim in the Blue Lagoon? Icelandair can do that for as little as $327, in the coming months. I've seen flights in Norwegian's spacious, if no-frills Premium class cabin from New York and Oakland for roughly $500 each way, an absolute coup, and almost definitely unsustainable at those prices, in the long run.

You know what? Who cares. I certainly don't—having flown Norwegian multiple times over the past couple of years, all I can tell you is, if you're sitting at home wondering if the airline (which is expanding at an almost dizzying rate) will be around long enough for you to try it, you're doing it all wrong. You should be out there, seeing the world. You should be booking a ticket, right now, before the whole thing comes crashing down, a thing that fairly prominent naysayers have predicted will be forthcoming. Go to Iceland for a few days. Try the new services from Newark and Boston to London and Paris, which Primera will launch in the spring, with fares from (we're told) $99 each way.

But—and there's a big but in here, for sure—just make sure to read the fine print. Actually, it's not fine print at all, it's fairly being screamed from the rooftops: All of these fares, with few to no exceptions, are strictly a jumping off point. They are not for every kind of traveler, they do not include much of anything, whether we're talking about seat assignments, cabin baggage, food, snacks, you name it. If you aren't prepared, you will in some cases see your fare double, or worse.

How to beat the house? It's easy. Your best bet is always to use these airlines for short, simple trips where you can fit all your things in your size-appropriate carryon; Norwegian is actually relatively generous, as these things go, allowing a regular carryon plus one small personal item free of charge in the cabin, on most flights. (WOW Air, for example, is less benevolent, charging $29 one-way for anything over 11 pounds, no matter where it fits.)

Probably don't try to take the whole family (and their toys) on vacation, without budgeting for your seat assignment fees, your baggage fees, and whatnot; these fares are best for the young, the young at heart, solo travelers and groups who don't mind not sitting together. Follow the rules, plan ahead, pack smart, and know what to expect, and you'll find yourself loving the ride—for about as much as it costs to fly coast to coast here in North America, sometimes even a little less, you could be making regular treks to Europe. For now, anyway.