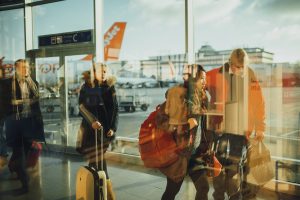 What's It Like Being an Airline Gate Agent? 6 Lessons Learned on the Job

Spending a day dealing with hundreds of airline passengers and piles of oversized carry on bags is not most people's idea of fun. And while I'm no glutton for punishment, I jumped at the chance to learn what takes place on the other side of the counter as a Delta Air Lines gate agent at the world's busiest airport, Atlanta Hartsfield. With 300,000 annual miles and over four million lifetime miles on Delta, I know the airline well. This experience, however, was an eye opener.

Lower fares mean the airlines try to get by with fewer gate staff, which puts pressure on one person to perform many tasks. Gate agents are tasked with driving the Jetway, opening the door, arranging for wheelchairs and unaccompanied minors, directing passengers to connecting gates, clearing standbys, checking the new crew, boarding new passengers, gate checking bags, closing the door, and pulling the Jetway all within about an hour per flight.

In between, they must answer endless questions. I was shocked when people approached my clearly marked gate to ask if this was the gate for some other city. Or asked me to look up their gate rather than check the information screens a few feet away.

I was asked where the restrooms might be, how to get to the escalator, where to find an electrical outlet, and what time boarding would begin all day even though signs are plastered all over the airport.

My day began at 6 a.m. with a flight to Denver. My role: scan boarding passes. Sounds easy? Au contraire. That bar code is hard to scan properly especially when rushing. An insistent clock ticks away as departure time creeps up. Get the flight out late, and management holds you accountable.

With the last passenger boarded and final carry on bag gate checked (overhead space fills up fast), we were ready to close the door. But wait…there was one more passenger on board than seats. I hadn't scanned one boarding pass properly. Now, we were in trouble. Five minutes to go, one gate-checked bag to offload, and the seconds were ticking fast. With one minute to spare, we closed the door.

You can be as efficient as possible, but one mistake causes the house of cards to crumble. I learned from my mistake, but had little time to pout. Another plane was pulling in; the Jetway was in place and door opened. We started all over again. No bathroom or coffee break.

Remembering the codes and computer keystrokes for changing seats, clearing standbys and upgrades (a process rigorously controlled by the computer with little room for chicanery), clearing seats from late-connecting passengers or those who no-showed, and printing boarding passes all at the same time was quite a feat.

A few things I learned:

1. Hollywood loves to portray gate agents who tap away endlessly into a computer with a blank stare. Yet, there is a reason for all that endless tapping. Most airlines use archaic codes to perform even simple tasks. Changing seats requires entering a series of seemingly random symbols. Lesson learned: try to ask an agent when they're not busy if you want to change seats.

2. Crowding the boarding door area 20 minutes before boarding begins or standing in the way when one's boarding zone has not been called only inhibits efficient boarding for the gate agent and the passengers. People get anxious and worry about finding space for cabin bags. However, this delays boarding and leads gate agents to become more anxious as the clocks tick down. This may lead to more bags being gate checked in order not to delay the flight. Passengers should remain seated or clearly out of the way of the Jetway door to allow a constant flow of boarding passengers. In the end, it helps everyone. Many airlines are placing kiosks in boarding areas so that people can reprint boarding passes or change seats without seeing a gate agent. Use these machines when possible to free up gate agent time to handle more complicated passenger requests.

3. Flights are very full these days. In the winter, don't place large jackets in an overhead bin upon boarding. It makes the bins look full, which adds to the stress of cabin crew and gate agents who have to check bags. Instead, wait until boarding is almost complete; then place (or stuff) jackets over existing bags.

4.The later in the day you travel, the less friendly the skies get. The morning folks were cheerful and responsive to my greetings. Later, people became more stressed and angry as delays began to rack up. If you can, travel in the morning since the evening takes the brunt of the day's irregular operations.

5. People were happy to gate check bags if I asked them nicely. I turned it into a positive reminding them they wouldn't have to lug their bag through the airport. They can head straight to baggage claim worry-free. Offer your bag to the gate agent if you're willing to collect it at baggage claim. You bypass bag fees and heavy lifting, and help the flight depart on time.
When a gate agent is staring at a screen when no one is there, they are not checking email. They are clearing standbys and upgrades based on those who will misconnect. Your seat request card is being cleared slowly. Don't approach the counter every ten minutes. The gate agent wants to get the flight out on time and will ensure you have your confirmed seat soon.

6. When an agent seems short on information during a delay, they're not being coy. They are awaiting more information from operations. Airlines work with numerous departments to secure a new aircraft, change baggage, adjust catering, secure a new gate, handle inbound connecting passengers, and locate a new gate for the next arriving flight. When operations called my gate during a mechanical delay with an update, my head was swirling. Passengers thought we were twiddling our thumbs, but a half-dozen people were working hard behind the scenes to get them on their way. The gate agent is just the messenger.

I learned a lot about humanity that Sunday: how rude people can be to complete strangers; how lazy people can be without utilizing information around them; how hilarious people can be with their assumptions and “know-it-all” attitudes. More than one person handed me their boarding pass with their teeth because their hands were full. Others jabbered into cell phones without even acknowledging me. One even yelled at me to pick up his child's toy!

There were nice people too. Those that thanked me, wished me a nice day, and even said I had a nice smile! In my one-day experience, I encountered two medical emergencies, one soiled seat, one mechanical delay, four upset customers (who arrived off a delayed flight and proclaimed "I will never fly this airline again," a phrase gate agents know all too well), and two unfriendly Detroit flight attendants who accosted the agent for not opening the door fast enough.

Gate agents are busy, but even a simple smile can make their day. Remember they are working under pressure, and one gate delay could lead to punishment. Still, the agents I worked with love their job and genuinely exhibit that towards customers. Help them do their job efficiently, and, in the end you're doing the entire plane a favor by helping everyone depart on time.