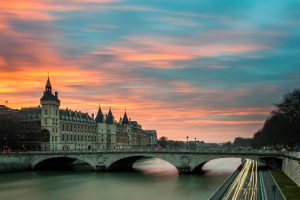 The crowds have all packed up, the weather has cooled, and fares have never been lower. So why are you here and not in Europe this fall? From London to Budapest, here's a look at what's on for fall, along with the low fares to fly you there.

1. My Name Is Prince, London

Have a little bit of a thing for purple metallic Cuban heels and well-crafted pop songs? You might consider a quick trip to London this fall for My Name is Prince. The exhibition includes instruments, costumes, hand written lyrics, and awards, all on display for the very first time. The exhibition runs from October 27 through January 7 at the O2 in London. General admission is £25 for adults and £12 for children.

Fares to London Gatwick are currently available for as little as $315 round-trip, nonstop, from the East Coast.

For a complete look at current finds, check out our listings for both Gatwick (GTW) and Heathrow (LHR).

How do you make a Christmas market even better? How about adding an amusement park? With a roller coaster! Going strong since 1843, Tivoli Gardens is the second oldest operating amusement park in the world. Walt Disney liked it enough to open a park of his own (maybe you've heard of it), and Michael Jackson was so taken by Tivoli that he offered to buy the whole thing.

With over 60 market stalls selling holiday crafts, decorations, and sweets of all kinds, visitors can easily tick off their holiday shopping lists before the big day. The market is open 7 days a week, from November 18 through December 31. Admission is 120 DKK for adults, and 55 DKK for children ages 3 to 7.

As with the rest of Scandinavia, Denmark may not be the most inexpensive destination in Europe, but it is one of the cheapest to fly to, with round-trip fares in the $300-$400 range on Norwegian Air Shuttle and WOW air.

See our fares to Copenhagen (CPH) from all over the US and Canada.

Not that anyone needs a reason to drink wine. Or to go to France, really, but Beaujolais Nouveau Day is a good excuse for both. On the third Thursday in November, this light young wine makes its way from the Beaujolais region, to the rest of France and beyond, with parties to mark the occasion. You'll find the biggest celebrations in Beaujeu, the capital of the Beaujolais region, located 4 hours from Paris by train. Or stay in Paris and hit up one of the many Beaujolais events at bars and restaurants across the city.

Beaujolais Nouveau Day officially begins at 12:01am on November 16.

See our fares to Paris, both (CDG) and (ORY), from all over the US and Canada.

Hungarian wine? It's a thing, and has been for hundreds of years, at least until history intervened with a bad hand. That's all changing now. The New Wine and Cheese Festival is an annual event (not to be confused with the Hungarian Wine Festival in September) taking place at Vajdahunyad Castle, featuring small production wines and local cheeses. Prizes are awarded to both. Once you've had your fill of sweet wine and stinky cheeses, sweat it all out at the Gellért Baths.

This year's festival takes place on November 28 and 29, from 10am to 6pm daily, with tickets available for HUF 2,000, which includes entry into the Museum of Hungarian Agriculture.

Ready to make the trip? See our fares to Budapest (BUD) from all over the US and Canada.

Home to some of Europe's most reputable opera houses, theatres, and museums, Vienna's fall season is a busy one with puh-lenty to offer visitors. That is especially true this fall with 48 productions and 90 events included in the 30th annual Wien Modern Festival. Celebrating performance and visual art, the festival runs through December 1. For schedules and ticketing, visit wienmodern.at.

See our fares to Vienna (VIE) from all over the US and Canada.

Yes, there are sites to see by day. Lots of 'em, in fact. But visit in November and you'll find just as much to do at night. The 41st annual Rome Jazz Festival features a full month's lineup of jazz heavyweights such as Mulatu Astake and Chick Corea. And you'll be pleased to know that fares to Rome have come down quite a bit this year, with Norwegian set to begin new nonstop service from Newark on November 9.

The Rome Jazz Festival runs from November 2 through November 30. Ticket prices will vary for each event. More info at romajazzfestival.it.

See our fares to Rome (FCO) from all over the US and Canada.

Modica, a small city in Ragusa in southeastern Sicily, was once a key trade city back in the days when Sicily was under Spanish rule. Chocolate made its way from the New World to Sicily via Spain, flavored with pepper, vanilla, and cinnamon. Today, Modica celebrates its chocolate past with the annual Chocomodica chocolate festival in early December.

This year's festival takes place from December 8 through December 10. Visit ChocoModica for details.

Modica has no airport, though you can find inexpensive flights to Palermo (PMO) and Catania (CTA).

After being spared the plague way back in 1643, Lyon continues to light candles as a gesture of thanks to the Virgin Mary. Of course, now Lyon has moved on to include a city-wide electric light show in addition to colorful candles placed on every window sill. The event lasts 3 days and draws crowds of up to 4 million people. This year's festival takes place December 7 through December 10. More info at FetedesDesLumieres.Lyon.fr/.

See our fare listings to Lyon (LYS), or consider a cheaper flight to Paris (CDG) and enjoy the scenic two hour journey to Lyon by rail.

No surprise, whisky is the national drink of Scotland, with over 100 distilleries operating throughout the country. Can't make time to drop in on all of 'em? Sample a dram (or several) of Scotland's very best at the 2017 Glasgow Whisky Festival. You'll also find whiskies from elsewhere in the world represented, alongside traditional Scottish foods and whisky-related books, art, and talks.

And don't worry, it's definitely not too late to score a last minute fare to Scotland. Nonstop fares to from Newburgh, NY to Edinburgh (only an hour by train from Glasgow!) can be booked for as little as $411 round-trip, for travel next week!

See our fare listings to both Glasgow (GLA) and Edinburgh (EDI) for a look at deals from all over the US and Canada.

The current exhibition at Frankfurt's Stadel Museum examines the friendship between French artists Henri Matisse (who seems to be having a real moment lately) and Pierre Bonnard. In addition to over 120 paintings, prints, drawings, and sculptures, the show offers a glimpse at the artistic process through personal correspondence and photography. The show runs through January 14. General admission is €14, or €24 for a family ticket. More info at www.staedelmuseum.de/en.

See our fare listings to Frankfurt (FRA) for a look at deals from all over the US and Canada.