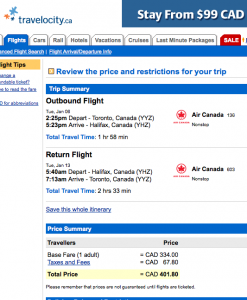 Air Canada, too, selling seats for (much) less on its own site, stiffing online travel agencies

When we've mentioned this subject before, a few of you responded with, well, duh! of course airlines always sell seats cheaper on their own sites. But we're not talking like $7 or $10 cheaper (saving the fees that online travel agencies, such as Travelocity and Orbitz,  charge). We're talking hundreds of dollars cheaper, somtimes.

We've noticed that Air Canada is back in the game of doing an end run around Kayak, Orbitz, Travelocity, Cheaptickets, and so on, when they have a sale. AC doesn't actually make a big deal of it ("You can only buy these fares right here on Air Canada!") but that's the truth of the matter. And this is why you really can't put your full faith in any site that claims to aggregate airfares, whether it's a fare prediction site, an historic airfare reporting site, or an airfare comparison site. Not unless the data is researched by real live breathing humans.

Today, I was doing some fare research on various routes within Canada, and the example below is just one of dozens I found. Air Canada is having what they tout as a 50% off sale (they don't say 50% of what... their absolute highest Y classes?). Anyway, for Canada, they're pretty good deals.

The example below is for nonstops between Toronto and Halifax for early January travel.

Travelocity.ca had this route at a lowest $CDN 401.80 RT on Air Canada nonstops including taxes and all those other horrendous Canadian fees such as airport improvement and whatnot.

Searching on Kayak, we were directed to Cheaptickets.com for the lowest fare, where we saw $US 344 RT But Aircanada.ca has the same route and date for a lowest $CDN $308.80 Full disclosure: By the way, we at Airfarewatchdog actually forfeit revenue when we send you to Air Canada (with which we have no montetary dealings) to buy a fare rather than to some of the online travel agencies with which we do have a relationship. But that's just the way we do things here.