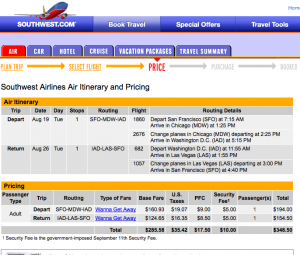 Are airfares only for the rich now?

We usually don't get into debates with other journalists and fare tracking sites, but we beg to differ on this one.  USA Today asks in a headline today "Will fares go so high that only the rich can fly?" The article states that "In late July...United Airlines' cheapest non-stop round-trip coach fare for travel in mid-August between San Francisco and Washington was $580" (it doesn't state whether this includes taxes). As a source, the author quotes another fare comparison service.

Well, OK, nonstops on United were (and are) pretty high. In fact, they're now about $750 RT with taxes! But Southwest (still) has connecting flights on that route in August for $348 RT including tax (the source the article quotes doesn't monitor fares on Southwest) as you can see below; and Airtran has the route for August for $285 RT including taxes. OK, they're not nonstops. But that doesn't mean that travel is just for the rich, unless you're determined to spin an article that way to prove a point.

Both of these fares were found on August 4 using a flexible date search on Travelocity and Southwest.com.