A simple flight search can yield hundreds of results, stringing together many different airlines, flight times, and connection cities. Most of us assume that the flight options we’re being presented with online are all that’s available, or at least the best of what’s available given our search parameters. In actuality, that’s rarely the case.

Southwest happens to be the largest U.S. airline, at least in terms of domestic passengers carried, and yet you won’t find it’s fares included in your search results. The reason? Southwest prohibits "any automatic device, program, or algorithm" from monitoring its fares. Lucky for us, Airfarewatchdog uses real people, not a program, to evaluate and list low fares from Southwest. They certainly don’t pay us for sending them traffic, but, as a low fare listing site, it would be a disservice to our users not to report on what Southwest offers.

Aside from being one of the largest airlines in the U.S., Southwest operates a lot of nonstop routes, often for less than other carriers. Once you factor in its generous baggage allowance of two free bags plus consumer-friendly policies around ticket changes, Southwest offers the best value. Notice I didn’t say it’s always the cheapest. It sometimes isn’t. Competing legacy airlines sometimes undercut Southwest but usually only by a few dollars.

That slightly lower price might catch your eye until you realize bags will cost you extra and, oh yeah, it’s in basic economy—something else you won’t find on Southwest, at least for now.

Here's a case in point: let's say you wanted to fly from San Jose to Kona, Hawaii, nonstop. Alaska, of course, flies that route nonstop, and so does Southwest. For the same dates in May, Alaska shows a fare of $302.79, one penny less than the same trip on Southwest at $302.80. The difference comes down to the fare type. This is a SAVER fare, which is Alaska’s take on basic economy. If checking bags, tack on an additional $30, or another $40 for bag number two.

SAVER fares aren’t eligible for ticket changes which means if you want to alter your return date, too bad for you. Meanwhile, Southwest gives you those two checked bags, and, if you decide you need a few extra days in Hawaii, you can change your departure date and only pay the difference in price, if there is one. 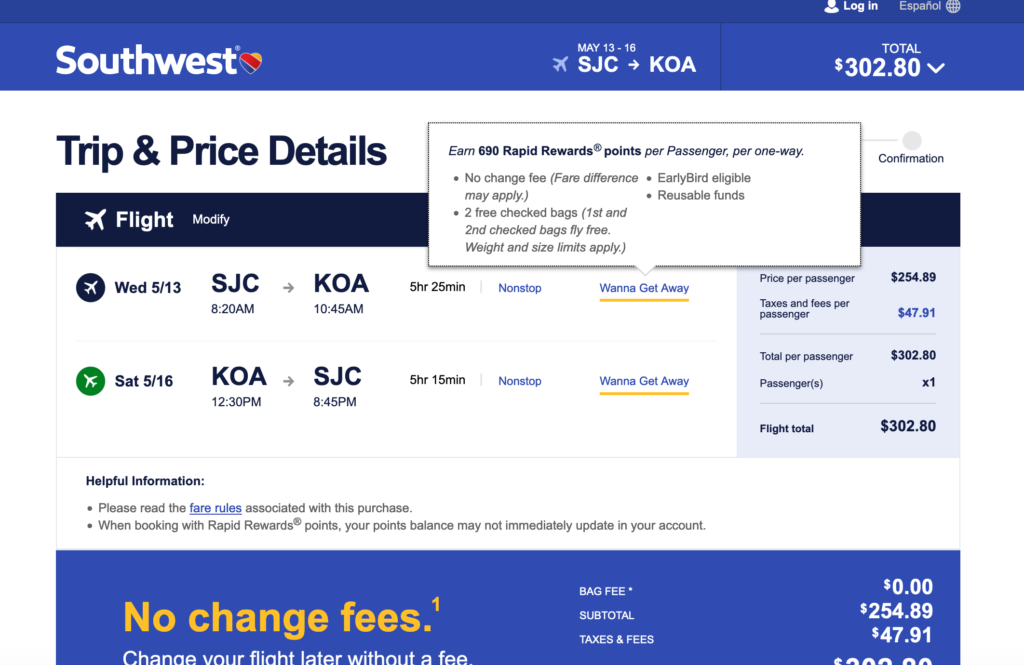 Depending on where you go to book your flight, you could easily miss out on these types of deals. Some sites may show you the Southwest flight details without providing the price while most tend to leave it out of the results altogether.

As always, you can find the latest Southwest fares from your area listed here.