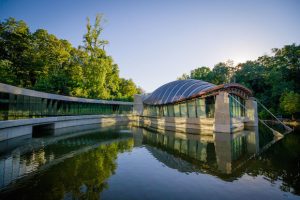 Think You Know Arkansas? One of America's Most Underrated States Is Full of Surprises

From the subtropical lows of the Delta in its eastern quadrant to the mountain highs of the Ozarks, way up in the northwest, Arkansas geography varies almost as widely as the state's culture itself, a place that will in one moment confirm every stereotype while in the next, confound a visitor's expectations. (Would you expect any less from a state where both Bill Clinton and Mike Huckabee have at one point or another been in charge?)

Known as The Natural State for a reason, for many people the love affair with Arkansas begins in its almost-unending open spaces—on the hiking trails of its national forests and parks, while kayaking along its wild rivers, swimming in chilly, clear waters below a wealth of waterfalls or soaking in its mineral-rich hot springs. But that's only the start—there's art, culture, history, good barbecue and even (no, really) a cool little scene bubbling under in the capital, Little Rock. Curious? You ought to be. Here are six essential stops in one of the most underrated states in the union.

It begins with one of the country's best new art museums

Put the Crystal Bridges Museum of American Art anywhere and it'd be worth visiting—this unique temple to art, design and the environment just so happens to be in a small Arkansas town called Bentonville. Sound vaguely familiar? That's probably because one of the world's mightiest retailers (Walmart, if you hadn't guessed yet) is headquartered here. The museum, designed by starchitect Moshe Safdie and nestled inside a beautiful natural preserve with its own Frank Lloyd Wright home (open to the public) and a superb collection of outdoor art, is funded by Walmart money, but you'd never know to look at it. The sprawling complex tends to overwhelm the collection hanging indoors, but being here is an unforgettable experience. When you're done, take the well-kept footpath that leads right into the heart of town, where the chic 21C Museum Hotel, itself quite the looker, doubles as an art gallery, featuring some striking modern pieces. Move on to one of North America's most fascinating small towns

Barely an hour from go-go Bentonville via winding highways that take in some very good mountain scenery, the artistically-inclined Ozark hideaway of Eureka Springs has been a destination for vacationers and since the Victorian era. Built in a narrow valley and bragging a wealth of well-preserved historic architecture, there's a distinct magic to the town, which grew up around its natural springs, renowned for their so-called healing powers. Nearly 150 years later, a day of exploring its steep streets and public pathways followed by a soak or a steam at the Palace Hotel's restored bathhouse (dating back to 1901) remains an Arkansas essential. While you're in the neighborhood, stop by one of the country's most up-and-coming college towns

Pop into Onyx Coffee in Fayetteville on any given day and you'll immediately get the picture—this smart, science lab-like roaster café buzzing with happy energy sums up the town it serves quite neatly: here, you're most definitely in the Arkansas of the future. Almost doubling its population since 1990 and home to the University of Arkansas, Fayetteville has been around forever, but everything about it feels new, forward-looking, from its cool downtown (complete with historic square and farmers market) to the lively arts community to an impressive food culture—there's even a startup scene. Staying overnight? Check into the secluded Pratt Place Inn, an easy walk from campus in what feels like a private park (ask about the walking trail out back). Soak in one of the country's most unique national parks

Before there was a gazillion-dollar pharmaceutical industry, American doctors sent patients to the town of Hot Springs to take the waters. Spas sprung up around the namesake springs, grand hotels threw open their doors and contemplative pathways, where patients would be encouraged to stroll, were built on the hill above what became known as Bathhouse Row. It was a truly natural cure. Today, the city is but a shadow of its former self, but the creation of Hot Springs National Park has breathed new life into its historic tourist district—you can come fill up on water, book a bath, plan a full spa weekend or simply explore the trails. Whatever you do, don't miss a stop at McClard's BBQ, a Hot Springs staple. Winding its way down through the rugged Ozarks toward the steamy, low-lying east, the untamed Buffalo is one of the only all-natural rivers (no dams, no diversions) left in the lower 48 states, a feat achieved after years of successful campaigning. This means the scenic river and surrounds—some of the most superb waterfalls in middle America are found here—remain wide open for kayaking, canoeing, swimming and chilling. (Is it summer, yet?) Plagued though it may be by the usual urban ills (let's start by talking about the hollowed-out downtown core, for example), it seems that for everything Little Rock once got wrong, it's now doing something else right. There's the user-friendly waterfront, home to the architecturally striking Clinton Library, expansive wetlands and miles of paths to explore. You can rent a bike in the historic and very pleasant River Market district and spend a morning on the 17-mile Arkansas River Trail. Neighborhoods like SoMa and Hillcrest are home to lively little scenes, now—stop in at Community Bakery, or Mylo Coffee, to see what's up. And don't forget the city's Central High School, that Civil Rights-era flashpoint, now a national historic site—it's still in operation, but guided tours are readily available, by reservation. (A ranger-staffed visitors center across the street offers an in-depth look at that stirring moment in American history, should you be pressed for time.) Little Rock may not top your list for a romantic weekend anytime soon, but there's much to see and do—if you're coming to Arkansas for any reason, drop on by.

Have a look at current fares from all over the US and Canada to Little Rock and Fayetteville.