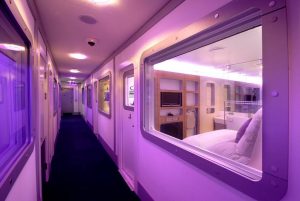 Being Stuck at the Airport Is Fun Now, Thanks to a Growing Number of Gate-Adjacent Pod Hotels

Waiting out the world's longest layover? First flight out in the morning? In dire need of a nap, but don't want to pay for a room at the airport Hilton? Good news—sleeping in the terminal is, well, the new sleeping in the terminal, with a variety of airports opening new capsule, or pod hotels, often a short walk from your next gate.

Until very recently the sort of thing most people only knew from secondhand tales of travels to space-starved cities such as Tokyo, the pod concept is quickly picking up steam elsewhere, finding its way into a selection of hub airports much closer to home.

Advertising as hotels offering everything that travelers need and very little they don't—saving everyone money in the process—rooms range from impossibly tiny to comfortably snug. Some utilize the latest in lighting and climate technology, others focus more on sleep quality and shower heads; all are relatively comfortable and, depending on demand, very reasonably priced. Before you fly next, you should know about the following four, fast-growing brands—they could be popping up soon in a terminal near you.

Easily the best of the bunch and so popular they've now branched out into city centers in the likes of New York and London, this cheerful Dutch chain began life (and is still a smash hit) at Amsterdam's Schiphol Airport (335 rooms, from $95) later branching out to Paris-Charles de Gaulle (230 rooms from $90). The hotels offer compact but design-conscious sleeping spaces, all with fast, free wireless internet and often with massive picture windows, so you don't feel like you're sleeping in a closet. Each property features a welcoming lobby lounge, where you can socialize, get work done or grab a snack.

Where are they now: Amsterdam (AMS), Paris (CDG)

More than a few heads turned when the parent company of London's ubiquitous Yo! Sushi chain (the one where you eat off of a conveyor belt) announced that they'd be building pod hotels at airports. Just a few short years later, their Midtown Manhattan location is so wildly popular, it's often barely accessible to budget travelers—Boston and Singapore will open this year. The bulk of their trade is still done at airports, however, offering day rates from about $50 and overnight stays for roughly $90, depending on demand. Famously lit in soft, colored light, spaces are built for cocooning—they tend to be well soundproofed, there are flat screen TV's and abundant free wireless internet; small pull-out desks create a proper little workspace, even. Need a cup of coffee, tea or hot chocolate? Have all you want, it's free. Tip: If you've just landed in Paris (CDG) and are looking to freshen up, they have shower-only cabins for $15 per 45-minute stay.

The salaryman's best friend is now available at Tokyo's Narita airport—this proper capsule hotel brand (with a design conscious twist) offers overnight stays for $45 (sometimes less), naps for about $15 and proper showers just a few bucks. Sound affordable? In Japan, you always get what you pay for—these are actual capsules, designed for nothing other than sleep; think a trip to the gym but with a nice nap, instead of a workout (your stuff goes into your locker, bathing facilities are fitness center-standard.) Note to light sleepers: Don't expect much in the way of soundproofing.

Where are they now: Tokyo Narita (NRT)

This budding, UK-based brand marries the best of its larger competitors, offering both smart design, a high level of comfort and a stripped-down vibe that makes it all more wallet-friendly, while also offering more luxurious options (think corner rooms with massive views) for those in the mood to pay for them. Rates fluctuate quite a bit, but your cheapest option, a windowless pod at the Gatwick Airport location, will often run for around $75. As appealing as the rooms can be, these aren't really "hang out" hotels—possibly to make up for that, guests receive a booklet offering a fairly impressive range of freebies and discounts within the airport. Think complimentary cocktails with dinner, or—useful!—snack runs to Marks & Spencer.

Where are they now: London Gatwick (LGW)

Built from enviro-friendly materials, bragging cool white noise systems and flat-screen TVs (free Netflix!), and—most importantly—a versatile, comfortable daybed for hanging out or naps, these in-terminal sleep spaces are making layovers at a growing number of American hub airports a lot less painful—for a fairly steep price. One hour (the minimum buy) goes for $42, with overnight stays for $140; showers are an extra $20. The trade-off? Slightly more space than you might be expecting.

Where are they now: Atlanta (ATL), Philadelphia (PHL), Dallas-Fort Worth (DFW)

Taking the term pod very literally, these aren't even hotels, but instead mobile pods that offer what amounts to little more than a (very nicely designed, in Finland) first class, flat bed seat in which to sleep in complete privacy, often within a dedicated airport lounge. You get in, the breathable shade rolls down and you're good to go for as long as you need, starting at as little as $7/hour in Helsinki or $14 at Abu Dhabi and Dubai and going up accordingly for longer lie-ins. Not to worry: Secure storage is available for your valuables; you'll also find a charging station for your electronics.