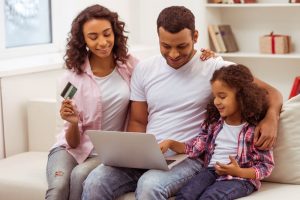 How to Fly for (Almost) Free Using Credit Card Points

For a select few road warriors, frequent-flyer programs are rightly so called. Today's loyalty schemes are designed to richly reward those who travel frequently with all manner of perks, including upgrades, lounge access, priority boarding, and so on.

Such elite perks are reserved for Masters of the Travel Universe, however. For infrequent travelers—the great majority of travelers, that is—those benefits are out of reach. In fact, as almost all larger airlines have redesigned their frequent flyer programs to reward customers according to their spend, rather than the number of miles flown, travel-rewards programs have never been less rewarding for the occasional flyer.

While the earning rates for flying have dwindled, especially for non-elite program members traveling on discounted coach fares, the number of miles required for award flights has remained relatively unchanged. So for the average traveler, the primary source of miles has fundamentally changed, from miles earned for flights to miles earned for spending.

Accordingly, for many, frequent-flyer programs have become frequent-buyer programs, rewarding them with complimentary flights in exchange for miles earned for purchases charged to program-affiliated credit cards.

Members of major airline loyalty programs today earn more miles from travel-rewards credit cards than they do from flying. It's more than possible to earn enough miles to fly on a complimentary ticket without earning a single flight mile; many people do just that.

First, though, you must choose which of three available types of travel rewards cards fits your goals and spending style.

Every airline mileage program has one or more co-branded credit cards that award miles for any and all purchases charged to the cards, typically two or three miles per $1 spent on the host airline's tickets, and one mile per $1 for anything else.

In addition to the airline-specific cards, there are credit cards that award points with a set value, generally between 1 and 2 cents apiece, which can be redeemed for airline tickets through the issuing bank's online portal or used to receive a rebate on airfare in the form of a statement credit.

And finally, there are cards which award points that can be used like fixed-value points to purchase air tickets through the card issuer's portal, or that can be transferred to other airline or hotel programs.

For example, in American's AAdvantage program, the world's largest, a complimentary round-trip domestic ticket can be had for 25,000 miles. AAdvantage members can earn one mile for every $1 charged to the Citi/AAdvantage Platinum Select World Elite Mastercard (annual fee: $95, waived the first year), and two miles per $1 spent on eligible purchases. So, depending on the mix of travel and non-travel charges, you'd earn a complimentary ticket after spending between $12,500 and $25,000. (Disclosure: Citi is an Airfarewatchdog advertiser.)

Similar co-branded cards are available from all the major U.S. airline programs, often including both cards with and without annual fees, with more and fewer associated perks, respectively.

A good fit for: Travelers who fly at least occasionally, and can conveniently and cost-effectively keep the bulk of their flights on a single airline.

Tip: It's important to note that, with the exception of convertible-points miles, discussed below, miles in one program cannot be converted easily or cost-effectively into miles in another program. For that reason, it's extra-important to choose the right program, and to stick with it. Miles earned across multiple programs, even when substantial in number, still might fail to add up to enough for an award ticket. Whereas if the same number of miles had been earned in a single program, you'd be well on your way to complimentary flights.

The success of the airlines' program-linked rewards cards wasn't lost on banks, most of which now issue their own travel-rewards cards.

One of the most popular such cards is the Capital One Venture Rewards credit card, which awards users with 2 points for every $1 spent across all categories. The points can be used for a 1 percent cash rebate or a 2 percent statement credit for travel purchases charged to the card. So, a $400 ticket credit can be earned after charging $20,000 to the card.

The card has a $95 annual fee, waived the first year, and charges no foreign transaction fees.

Unlike airline-card miles, which can only be redeemed for travel on the host airline and its partners, Venture miles may be used to purchase tickets from any airline or hotel, with no blackout dates. On the other hand, Venture miles can only be earned for credit-card charges, whereas airline-card miles can be earned for flights, hotel stays, and many other partner transactions, plus charges to the program's co-branded card.

Other fixed-value cards include the Bank of America® Travel Rewards Credit Card, the Barclaycard Arrival Plus card, and the Discover it Miles card.

A good fit for: Consumers who earn the bulk of their miles from credit-card charges rather than from flying.

Like fixed-value cards, convertible-points cards award points that can be redeemed for travel with any airline or hotel at a fixed rate, typically 1 cent per point. But the points may also be transferred into select airline or hotel programs, giving cardholders an extra measure of convenience and flexibility.

As an example, consider the venerable American Express Green Card, one of several cards linked to the American Express Membership Rewards program. The Green card is, notably, a charge card rather than a credit card, so the balance must be paid off every month. Points are earned at the rate of 1 point per $1 spent, except for purchases made at American Express Travel, which are worth 2 points per $1. On the redemption side, points are worth 1 cent apiece when used for flights purchased through the American Express travel site, but may also be converted into points in 17 airline programs (including British Airways, Delta, Hawaiian Air, JetBlue) and three hotel programs (Choice, Hilton, Starwood).

The Green card has a $95 annual fee, waived the first year.

Other convertible-points cards to consider are the Chase Sapphire Preferred® Card, the Starwood Preferred Guest card, and the Citi ThankYou Premier card.

A good fit for: Travelers whose circumstances force them to participate in multiple programs and therefore need the flexibility of points that can be transferred to a range of programs.

Editor's note: This content is not provided by any bank, credit card issuer, airline, or hotel chain. Any opinions, analyses, reviews or recommendations expressed here are those of the author's alone, and have not been reviewed, approved, or otherwise endorsed by the aforementioned entities.