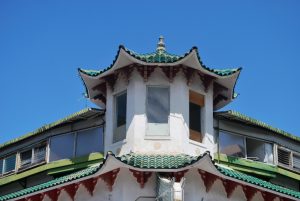 One of Honolulu's Grittiest Neighborhoods Is Suddenly Its Coolest

Rich in history of the rather dramatic kind and dripping with old-school charm (covered in decades of grit, but still), there has long been good reason for visitors to stop by Honolulu's Chinatown.

That is, if you could overlook the drawbacks—most people don't spend half a day (or more) flying to the middle of the Pacific to revisit all the things that make this and other similar neighborhoods in America's more temperate cities such a challenge. Homelessness, drugs, petty crime—oh, and don't forget the parking hassles.

Over time, in a city that's increasingly crowded, Chinatown, to an extent lying fallow while nearby areas thrived, began to attract the interest of local entrepreneurs, particularly on the food front. A few short years later—or, at least it seems like no time at all—Chinatown is all but Honolulu's coolest quarter. Next time you're in town, ditch your usual routine and get in here for a whole new experience of Hawaii. Here are six essential addresses to get you started.

Jenny Grondin and David Segarra accumulated years of experience opening high-profile restaurants in New York before moving to Hawaii, where they planned to open a place of their own. This time, however, it was personal. The couple wanted a restaurant that reflected their shared heritage—Grondin's father was a French chef, Segarra's family hails from Ecuador. After a brief detour to Maui, they rejoined city life and opened up this pocket-sized bistro inside Chinatown's historic Mendonca Building (1901). The menu is French-Latin inspired—the likes of charcuterie and steak frites can be found rubbing shoulders with ceviche, composed from the local catch. (Grondin, 62 N. Hotel St.)

Aloha, but chic? Roberta Oaks has that.

In search of island wear appropriate for, say, your next backyard tiki party in Portland? (Or Brooklyn or Austin?) Eschew the classic brands you'll find in their respective Waikiki boutiques and hang ten at Oaks' smart Chinatown shop, where you'll also find modern designs for both men and women with nary a palm frond to be seen. (19 N. Pauahi St.)

Grab a scoop (or three) at Wing Ice Cream.

Hawaii's most unusual ice cream parlor is tucked into a single scoop-sized space doubling as a science lab where owner Miller Royer conceives and executes his often-outlandish creations. Flavors change regularly, but start out with the notable li hing mango, which turns a favorite local treat—mango dusted with sweet, sour and salty li hing powder, made from the skin of pickled plums—into a new favorite local treat. Vegan ice creams made with coconut milk and refreshing herbal sorbets make regular appearances; because this is Hawaii, there's also shave ice on offer. (Wing Ice Cream, 1145 Maunakea St.)

Locals of a certain age are more than likely to remember their manapua man, neighborhood fixtures that made the daily rounds selling, among other things, that super-sized Hawaiian interpretation of the Chinese dim sum staple—the char siu bao, otherwise known as the pork bun. Tracing the roots of the manapua will lead you to this utilitarian Chinatown takeout joint, dating back to 1945—stepping inside is like stepping into a museum where the café is the only exhibit. Some find Char Hung Sut's manapua wanting, thanks to a sometimes-excessive bread-to-filling ratio —you can always opt instead for a to-go container filled with tasty, handmade shumai, known in these parts as pork hash. (Char Hung Sut, 64 N. Pauahi St.)

This chic vintage curio and home goods shop is the second wind beneath the wings of a charmingly odd collection of items culled from anywhere such things can be found, whether it's an estate sale across town or one of the far-flung destinations that co-owner Mark Pei visits regularly as an airline pilot. Finds range from classic cameras to taxidermy, as well as smaller baubles well-suited to casual souvenir shopping. Pei and partner Travis Flazer also host a series of classes in the store's basement gallery and event space on subjects such as pairing wine with local food. (Hound & Quail, 920 Maunakea St.)

Stop in for a civilized late supper at Livestock Tavern.

Breathing new life into a derelict dive bar, the second effort from the owners of the wildly-popular Lucky Belly noodle parlor (found just across the street) have another smash hit on their hands, this time with a concept that might go all but unnoticed on the mainland but in these parts, feels almost exotic: a comforting New American menu, changing with the seasons. Plus cocktails, which are some of the best you'll find in Honolulu. The food rises to the same level, whether it's lobster rolls, cod cakes, clam chowder or the burger topped with gruyere cheese and bacon marmalade. (Livestock Travern, 49 N. Hotel Street)

Check out the looks at Barrio Vintage.

A tightly curated boutique known for offering good quality at fair price points, Bradley Rhea and partner Jonathan Saupe seem to have a sixth sense for accessing the apparently limitless supply of classic and crush-worthy Hawaiian frocks. On their bright shop floor, you'll find these and much more island-appropriate apparel and gear, ranging from 1970s print tees and vintage jewelry to museum-worthy kimonos and little black dresses from the 1950s. Can't make it to the islands? Barrio maintains a well-regarded Etsy shop, offering a good selection of what's in the store on any given day. (1161 Nuuanu Ave.)

Start any day right at Scratch.

The hangover fix is in at this sweet daytime spot that breaks the unspoken rule in Honolulu, that pretty much every breakfast joint must serve a similar menu of mostly local food. Open most days at 7:30am—pretty early, for this neighborhood—Scratch reaches out across the Americas for menu inspiration, from chilaquiles to shrimp and grits. Stop in before 9 o'clock on a weekday to grab their recurring early bird specials. (Scratch, 1030 Smith St.)

Ready to make the trip? Have a look at our current finds to Honolulu (HNL).