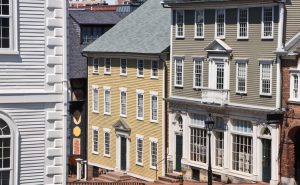 Cheap Flights to Europe from Providence: Rhode Island's Historic Capital Is a Now a Must-See

Starting in June, Providence will begin receiving scores of new visitors. Most of them will have no plans to see the city. They're here to see Edinburgh, Dublin, and Belfast. (And Cork and Shannon, Ireland, too. Oh, and don't forget Bergen, Norway.) The arrival of Norwegian Air's low-fare service at the Providence airport means big things for, well, the airport—many of these destinations will be served year-round, on a regular basis, with fares currently starting around $89 one way.

Irresistible, right? Don't rush to catch your flight, however—with frequent rail connections to all the big East Coast cities and plenty of low fare domestic connections (yay, Southwest!) it's easy to drop by a little early for a fun and affordable layover. Here's what to do, when you get here.

See one of the country's best small art museums.

Located on beautiful College Hill a stone’s throw from Brown, the Rhode Island School of Design may date back to 1877, but it’s anything but stuck in the past. Your first stop should be the RISD Museum—from Matisse and Manet to Warhol and an impressive decorative arts collection, this is so much more than just another college art gallery, it's one of the country's better art museums in its class. More into design than art? Pay a visit to RISD Works, the school's hybrid retail store, gallery and design showroom, providing a showcase for the creations of students, faculty and alumni.

Head downtown. (It's where all the cool people are.)

Physically one of the country’s most charming old city centers but for years lacking in reasons to visit if you weren’t an architecture or urban planning buff, things are looking up in Downcity. (That’s what they call downtown around here, FYI.) Start your quick walking tour at Bolt Coffee inside the hip Dean Hotel—this is easily one of the most serious coffee shops in New England right now. Next, walk over to Westminster Street, where Craftland—which sells the work of local artists and makers—is one of a number of cool shops on this increasingly lively retail strip. Need a drink? Stop in at The Eddy, which opens at 4pm daily for good cocktails. Those feeling snack-ish can make tracks for Washington Street, where Ellie’s Bakery is the casual follow-up to Downcity fine-dining staple Gracie’s. If you’re ready for a proper meal, Ken’s Ramen next door does a damn fine bowl of noodles.

New York may be home to more Italians, but a higher percentage of Rhode Islanders have roots in the old country (nearly 20 percent). There’s something timeless about Providence’s Atwells Avenue, which runs up Federal Hill, past a dizzying array of shops, restaurants and cafes. Head straight for DePasquale Plaza, where the action at Caffe Dolce Vita regularly spills out of doors—there’s nearly always plenty of good people watching. If you can't make it up here during the day (grab a meatball sub at Tony's, if you do), or even for dinner (pasta at Enoteca Umberto, you're welcome), that's fine—many a romantic night out in town ends at the neighborhood's Pastiche Fine Desserts, a classic, European-style bakery favored by locals for its cakes and coffees.

One of the country's older urban green spaces, Roger Williams Park has for over a century been a preferred relaxation space for residents of Rhode Island's capital, rammed with diversions ranging from the city zoo to the castle-like Natural History Museum. It wasn't until 2007, though, that the park's Botanical Center arrived on the scene, joining institutions such as one of the continent's oldest zoos. Currently New England's largest public indoor garden, you'll find everything from soaring palms to diminutive cacti under one roof.

Rhode Island is known for its share of quirks. Take the New York System concept, for instance. When you see a restaurant with New York System on the sign, this means you have located a place that sells “hot wieners,” which around here is basically a chili dog. David Byrne of the Talking Heads worked at Providence’s own Original New York System, a sliver of a storefront up on Smith Hill, while studying at RISD years ago. Also? Everyone in Rhode Island can tell you that the best thing to have with your wieners is a cold glass of coffee milk. (Of course, right?) If it turns out that coffee milk is your new favorite thing, you can buy the necessary syrup in any local supermarket—Autocrat is a favored brand.

The schedule has been scaled back over the years, but WaterFire, artist Barnaby Evans' sculpture-cum-happening that lights up a stretch of the Providence River on select nights (with a whopping 100 bonfires) is not to be missed, should you find yourself here during its annual performance schedule. The whole experience is set to stirring music; a festive, almost night market-ish atmosphere helps make the experience all the more memorable.

From the sleek, inviting Birch, a gorgeous Downcity nook for tasting menu dinners that revolve around seasonal New England ingredients, to the shoebox-sized North in Federal Hill's hip Luongo Square area with its fun, gently-experimental and Asian-ish menu, Providence can surprise the uninitiated with its food scene. For the most part, it manages to achieve a unique feat, at least for a food scene along the crowded and pricey Northeast Corridor, innovating and offering unique dining experiences, without the part where restaurants must charge and arm and a leg to stay in business. Lately, it feels like new must-try places are opening all the time—definitely make room on your itinerary for Oberlin, Benjamin Sukle's (Birch) more casual, New American follow-up, a simple but once again beautiful spot that feels like a cool, neighborhood bistro in a much larger city. This is still Providence, though—don't be surprised to find yourself sharing the bar with the people you saw at the coffee shop where your day began.

Ready to make the trip? Here's a look at current finds to Providence (PVD).