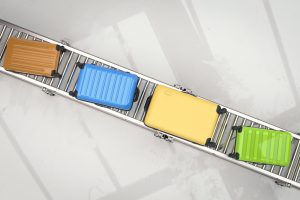 Never Again Lose Anything While Traveling. But If You Do, Here's Help.

Travel can be disorienting. With all the moving around, jumping from taxi to plane to hotel to the next destination, while suffering from jet lag and fatigue, it's a sure recipe for losing something along the way. Losing valuables is also frustrating and expensive. Lose a $900 iPad or a $200 set of electronic car keys and suddenly your trip costs a lot more than you planned.

And let's face it, losing stuff is emotionally draining.

There are three emotional reactions to losing something, whether traveling or not, according to Simon Fleming-Wood, chief marketing officer of San Mateo, Calif.-based Tile, which describes itself as a "smart location company," much more about which further on down the page. "Some people just figure what the heck, it’s only money and the item can be replaced; others feel bad about themselves," Fleming-Wood has discovered from research, "and for those who lose something through theft, there are feelings of violation." (I’m in the second category if you’re wondering; I feel incredibly careless and stupid if I lose something while traveling).

But there are some simple ways to prevent loss, and to recover from it if prevention doesn't work.

Start with prevention. At the risk of appearing obsessive/compulsive, make a list of everything you brought on the trip and check it off before you leave the hotel or plane. Phone? Check. Headphones? Check. Passport? Check. And so on.

If that sounds too fussy, fine. It does work though. But even the most dedicated list-makers lose things. So… Tile makes small plastic tracking devices that you can attach to virtually anything—a bike, a dog, a car, or a wallet, or a suitcase. Originally, Tiles were intended for finding things around the house, such as car keys stuck in the sofa, a coat pocket, a drawer. But as its user base has grown, Tile has become just as useful for finding items lost when you travel.

Tile claims that 90% of Tiled items are eventually found; there are now over 8 million Tiles in operation and the company is growing rapidly.

Here’s how it works: you put a Tile on or inside an item, register it, lose it, and mark it lost on the Tile app. There are millions of Tile users around the world now, and when one of them is within 100 feet of your lost Tiled item at any time, even for a few moments, then their phone will pick up the signal from your lost item. This will then alert you to where your device was last seen by the your fellow-Tiler's phone, or in some cases, such as an item left on an airplane, it will show you multiple locations as the plane moves from city to city (this has really happened, and one guy actually got his lost item back after figuring out which plane it was on and asking an airline employee to search the seat he had been occupying).

Tile is not a GPS device as such, rather it’s Bluetooth enabled. But it works in concert with GPS tracking on the millions of iPhone and Android mobile phones running the Tile app. The mobile phone that “finds” your device, by the way, doesn’t know that its owner is near your item. Reporting is anonymous.

Now what if you didn’t Tile something or if you did but didn’t get your item back? Surprise: your credit card might come to the rescue.

I recently left a beloved umbrella, bought in London from the iconic James Smith shop, that I'd managed not to lose for 10 years, in a plane’s overhead bin. (Umbrellas are almost made to be lost, which is why Tile has teamed up with Blunt Umbrellas and now offers a Tile-enabled model.) Upon landing, I tried going back to the gate but the aircraft was already on its way to the hangar. I called the airline’s lost and found, filed a claim, but the umbrella was never found--at least not by me, that is ("we have honest people and dishonest people just like everyone", as the airline lost and found lady explained). Then I remembered that I bought the ticket with my American Express card and there might have been free insurance for lost or stolen carry on items.

Your credit card might have similar protection, although I have to say that Amex is particularly good for carry on and checked luggage coverage.

Before you get all excited though, realize that credit card insurance doesn’t make it all that easy for people to make claims (obviously, the harder they make it, the fewer losses are paid out). You can't just call them and say I lost something pay me back.

You will need the following: the item’s original receipt (merely having a copy of the charge as it appears on your credit card isn’t sufficient); proof that you charged the entire cost of the flight on the card (again, your credit card statement isn’t enough, you need the sale confirmation that the airline sent you, and no, a flight obtained with frequent flier miles or any other non-paid trip does not qualify); a copy of the loss report you made with the airline or other relevant party such as law enforcement; and a completed claim form. Many people don’t keep receipts for things they buy, so that’s the main hurdle to reimbursement. Lesson: if you buy something that might be traveling with you, ever, keep the receipt in a nice safe shoebox.

Luckily, I was able to find all the bits and pieces, and American Express paid up promptly with minimal fuss, in the form of credit to my account. For the record, Amex covers up to $3,000 per trip for carry-on baggage and up to $2,000 for checked bags if you hold their Platinum card; for Green Card holders, maximum coverage is $1,250 and $500 respectively. Other credit cards also offer free insurance, in varying amounts, both for lost items and trip cancellation/delay, as outlined here.

Naturally, this is secondary insurance on top of whatever the airline pays you (airlines won't cover loss or damage to carry-on bags unless negligence can be proved, and they never cover "valuables" such as electronics, whether in checked or carry-on bags, so your credit card insurance automatically defaults to primary in such cases).

So to make sure you're triply-protected against losing stuff when you travel, know your three-point plan: list it, Tile it, and charge your trip with a credit card that has your back.