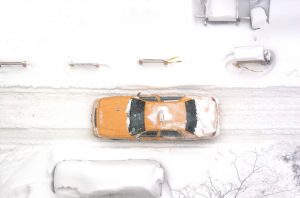 A Perfect Winter Weekend in New York for a Few Hundred Bucks? We'll Show You How!

Conventional wisdom may tell us that New York is the greatest city in the world, but there's at least one way it falls brutally short, again and again: the weather. For much of the calendar year, New York is either too hot, too cold or too humid— weather here is not something to be enjoyed, typically. It is something you endure, or, better still, ignore, as New Yorkers do, simply by refusing to go outside. Thing is, good weather really isn't required to enjoy New York—not in the least. There's so much to see, so much to do, the people watching in the streets is just as good in January as it is in June—being here is never a bad idea. Best of all, until spring arrives for real (like, according to the calendar, not according to freakish warm fronts), bargain hunters will find New York more affordable than just about any other time of year. In the mood for an invigorating break in the big city? No need to spend all year saving up—here's a handy guide to one of the best and cheapest weekends, ever.

Snag the hotel deal of the year

Like any other destination where a great deal of business is conducted, hotels will often drop in price on weekends, so there's that automatically in your favor. Unlike many other cities, for some reason, the lowest rates are almost reliably found on Sunday night, making a strong case for a leisurely, three-day weekend. A wealth of mid-range offerings have found their place in the city's formerly tight hotel market in recent years; you don't have to do too much heavy lifting to find rates below $150 per night on a winter weekend, whether you opt for safe, chain properties like the new Courtyard by Marriott, steps from the World Trade Center, or character-rich one-offs like the Jane Hotel, where a nightly stay in one of their ship cabin-like pods starts below $90 on some upcoming weekends. If you're really looking to save big and your plans are set in stone, for goodness' sake, don't pay retail—sites like Hotwire offer a chance to save a tremendous amount of money, for those willing to use the opaque Hot Rate feature. On a weekend in late February, for example, travelers have their pick of downtown Brooklyn's excellent three and four star hotels—at least five properties were listed for well under $99 a night, with everything you want and need in Manhattan just a few stops away on the train (better yet—walk across the Brooklyn Bridge). Up your budget to $125, and you're typically good to go in Downtown Manhattan at solid independents like Gild Hall, the World Center Hotel and others. Any frequent traveler can tell you—there are actually relatively few tourist-friendly city centers in North America where you could expect to do much better on price on a winter weekend. (No, really—check out rates in, say, Chicago. You might be surprised.)

Eat your way around town (for less than you'd think)

There wasn't even a word for it, really, when the Chelsea Market made its debut on Ninth Avenue, back in the 1990s—the food hall craze sweeping the nation and the world had yet to even become a glimmer in the eye of developers. Today, the market remains one of the best of the genre, adding and refining its options to create one of the best collections of affordably priced, very good food in New York. Offering everything from just-spicy-enough, comforting Taiwanese beef noodle soup at Very Fresh Noodles to astonishingly legitimate Baja-style street tacos at Los Tacos No. 1 to textbook-perfect hummus and fresh-made pita at Dizengoff, few leave here unimpressed. This isn't the only good food hall in town, either. Near Grand Central, Urbanspace Vanderbilt has some excellent options; ditto the Pennsy, right by Madison Square Garden and Penn Station, an area never really known for good food. Down on the Lower East Side, the historic, city-owned Essex Street Market continues to be an underrated stop—look for cheap set lunches at Ni Japanese Deli, Greek comfort food at Boubouki, stellar bread at Pain d'Avignon and things to put on the bread at the estimable Saxelby Cheesemongers. Evenings out can be more of a challenge on a budget, but not if you know your way around neighborhoods like Koreatown, a centrally-located strip packed with a wealth of options beyond the smoky and expensive BBQ halls the area is known for. From Japanese curry to casual sandwiches to bubble tea to food courts with stalls packed with options, you can eat well for around $10 per person, if you want to.

Fun stuff to do, without breaking the bank

The post-9/11 era has brought unbelievable change to Downtown, now almost at the point where it's making the rest of the city look bad. If you see one tourist attraction on your visit, it should be the magnificent, Santiago Calatrava-designed Oculus, a busy transportation hub and sparkling new shopping center at the re-imagined World Trade Center. Even the darkest, coldest day is forgotten, stepping off Church Street and on to the upper-level viewing platform above the absolutely massive main floor. Think Grand Central Terminal for the 21st century, scale-wise, with even more shopping—everything from the Eataly food hall and market to a multi-story Apple Store can be found inside the warmly-lit maze. From here, you can take a PATH train to New Jersey, head for the observation deck at One World Trade Center or continue on to Brookfield Place, a most impressive rethink of the World Financial Center, packed with more shopping, restaurants and two high-end food halls (Hudson Eats is the one you really want), along with a rotating schedule of art installations and activities in the palm tree-lined Winter Garden and Hudson River-facing plaza. Up for an epic walk? (The answer should be yes—walking remains one of the best ways to experience the city.) From downtown, you're in the perfect location to start one of the best urban walks in the world, winding your way through its compact and charming-even-in-bad-weather neighborhoods below 14th Street. Cut past City Hall and around the courthouses (you'll have seen these on Law & Order, The Good Wife and, oh, everything else, just about a million times), through Columbus Park and up Mott Street through the heart of Chinatown, which eventually bleeds into Nolita, one of the city's cutest and best neighborhoods, crammed with boutiques and bite-sized restaurants and bars that always seem to be packed to the gills with fabulous expats from various Commonwealth countries. From here, head west on Prince Street and into the heart of SoHo, now somewhat of a global shopping mall, turning right on Thompson Street, which delivers you directly to Washington Square Park, recently the receipient of an impressive makeover. (To fully appreciate the transformation, you'll just have to come back during the summer months, oh well.) Finally, cut through the West Village and over to the Meatpacking District, where one of the most talked about new cultural attractions in the city is found, at the foot of the famed High Line Park. Visiting the Renzo Piano-designed new home of modern art stalwart the Whitney Museum isn't cheap, but it's well worth budgeting for the $22 admission. Of course, if it snows, drop everything and get to Central Park, stat—there'll be sledding happening pretty much everywhere there's a slope to slide down; make time to disappear into the romantic Ramble, with its twisting, turning pathways. Covered in large amounts of snow, it can feel more like the Catskill Mountains than the middle of Manhattan. (Hope those shoes are waterproof.)

For the latest low fares, check out our recent finds for New York City (JFK).

Looking for more to do while in New York? We have a few more ideas:

Best of Brooklyn Half Day Food and Culture Tour